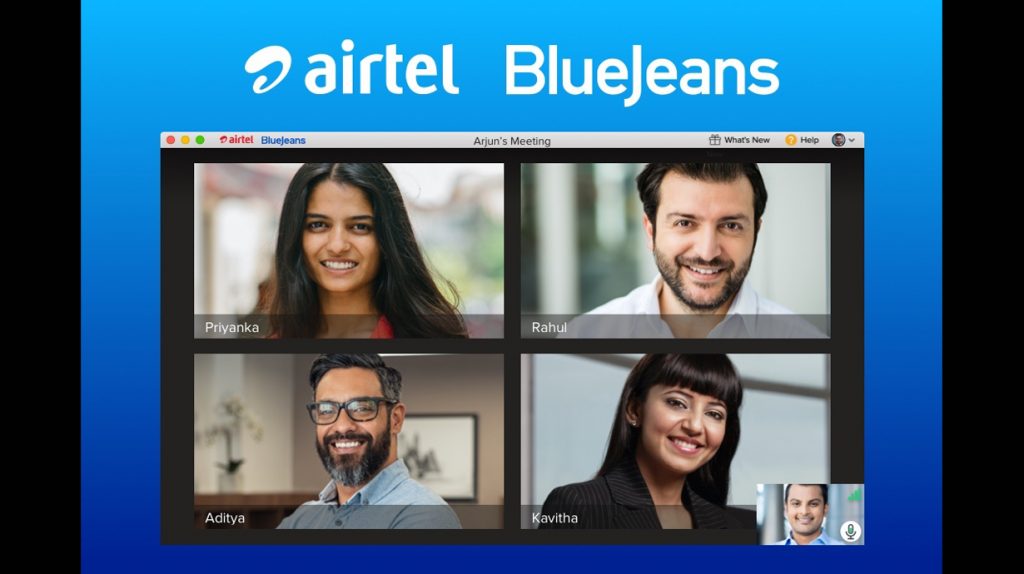 In a short summary, the function of Airtel BlueJeans is to help people easily and securely hold live video calls, conferences, webinars, and online meetings, and it lets users communicate and collaborate across mobile, desktop, browser and conference rooms.

Airtel telecom partnered with US-based Verizon-owned BlueJeans to make its video conferencing app available to the users in India. Airtel BlueJeans is available for free trial in India, as it is listed on the company’s website.

Airtel BlueJeans is quite different from the others as it aims to serve only businesses. It phases with everyone moving digital and connecting virtually, making video conferencing platforms a part of life, and as important video calling services.

Lately, JioMeet was introduced in India also. But the striking similarities between JioMeet and Zoom amount to a great deal. JioMeet uses Zoom’s IU and the company is planning on taking Jio to court.

Airtel partnered with Verizon to provide a secured video conferencing app, which they claimed comes with high-grade security, we can still recall Zoom’s security malfunction. “Airtel BlueJeans is a highly differentiated video conferencing solution that sets the benchmark with its high levels of security and ease of use,” said Gopal Vittal, Managing Director & Chief Executive Officer of Bharti Airtel.

The Airtel BlueJeans allows browser-based access as it uses open, proven standards for security as well as the WebRTC and HTML5 standards, enabling users to participate in meetings and events without requiring software downloads, a key requirement in some secure environments.

The first prototype of BlueJeans was tested in Pune in 2009 and in 2012 at the company’s R&D and development center in India. Krish Ramakrishnan and Alagu Periyannan were the founder of BlueJeans and acquired by Verizon.

Airtel also confirmed that the technology will be fully integrated with Airtel’s network, including its data centers and it will also offer an integrated audio solution, giving users convenient dial-in options to join the meetings.

Verizon CEO Hans Vestberg said, “Companies of all sizes around the world have seen the requirement for reliable, high-quality video conferencing services and require trusted partners to ensure the highest level of security. We are proud to come together with Airtel to help more Indian organizations benefit from our world-class communication product during this work-from-home era and beyond.”

Meanwhile, interested users can register for the trial on the Airtel Enterprise Hub website. Nevertheless, Airtel did not mention the pricing and plan details but plans on revealing them in the next couple of days.