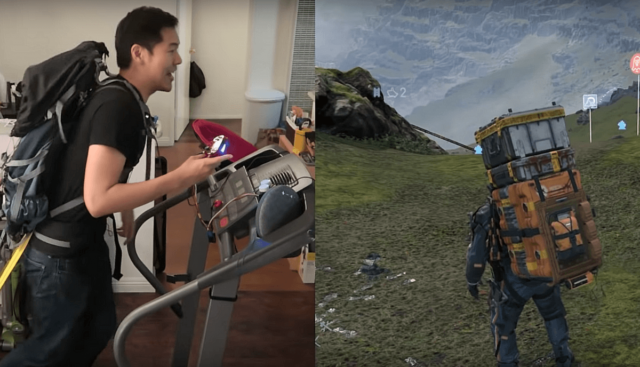 was released by Sony Interactive Entertainment for the PlayStation 4 in November 2019, and is scheduled for release by 505 Games on Microsoft Windows in Q2/Q3 2020.

The game is set in the United States during the aftermath of the eponymous Death Stranding, which caused destructive creatures from a realm between life and death to begin roaming the Earth. Players control Sam Porter Bridges (Norman Reedus), a courier tasked with delivering supplies to the fractured and isolated colonies that remain and reconnecting them via a wireless communications network. In the game, you have to keep running to deliver packages from one place to another.

And PS4 Controller is the PlayStation 4’s controller. It is similar to the PS3 Controller, with several new features. One new feature is a built-in two-point capacitive touch pad on the front of the controller, which can be clicked.

YouTuber Allen Page wanted was having a hard time keeping up with his New Year’s fitness resolution. So, he turned a broken treadmill into a PS4 controller to play Death Stranding. Page agrees that Death Stranding is “not a good game,” but he is still “obsessed with it.”

However, Page decided to turn this game as a means to work out and stay fit. So, he found a Treadmill, which was already seeing its last days, and made it Dualshock 4 compatible. According to Page, this maneuver would let him play Death Stranding, “the way it was intended to be played.”

How Allen Page Turned A Treadmill Into A PS4 Controller To Exercise?

When running on the treadmill, it was important for the player to stay upright. So, Page strapped a backpack at the end of the treadmill that every player had to wear.

Then, Page brilliantly connected a third-party PS4 controller with the treadmill. He used a cheap controller for this purpose because he didn’t “want to waste a good one on this.”

After getting the entire thing done, Page took a test run on the treadmill and was happy to find out that all the hard work was completely worth it.

When Page started walking at the average speed on Treadmill, Norman Reedus also walked at a brisk pace in the game. However, when Page starts running to burn more calories, then it triggered the L3 push button on the controller, and Reedus also ramped up the speed in the game.

With Backpack strapped on the back, Page and his friends exhausted themselves after running on the treadmill in less than five minutes. However, turning a treadmill into a PS4 controller increased their exercise time and decreased their game-time. So, it was a win-win situation.

Page’s invention was so impressive that both Hideo Kojima, the director of Death Stranding, and star Norman Reedus tweeted the links to his video.

How to Livestream the POCO India Event