Apple, A new report suggests that the folding phone may come out as early as 2022. If it’s true, we might as well say that the iPhone 14 will be the first foldable iPhone, and we can also expect a crazy price tag. Last year only, Apple co-founder Steve Wozniak said he wanted a folding iPhone, and Apple might be working on just that. 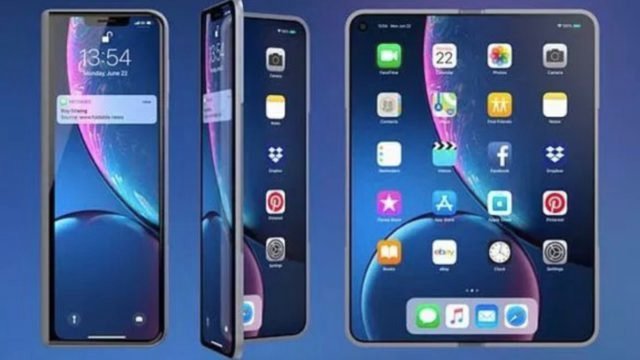 The report from Economic Daily suggests that Apple is receiving samples of folding phones from its Chinese supplier Foxconn Hon Hai. It might as well be true because the company has already secured several patents for a folding device. According to the report, the Cupertino tech giant is in the process of choosing between OLED and microLED displays for the folding iPhone, and as usual, Samsung will be providing Apple with the display.

Let’s talk about the finer details in the report first. Starting with the display, the choice between an OLED and a microLED would mean a huge deal. While both are viable options for a folding phone, a microLED is next-gen technology with better brightness, saturation, and power efficiency. Samsung has also gotten its hands on a new OLED technology with 10,000ppi pixel density, so we can say it might be another option for Apple to choose from.

Coming to the folding part here, the report says that the Apple folding phone’s hinge will be tested to sustain over 1,00,000 actions. The hinges will come from New Nikko, the same company that worked with Apple on the MacBook hinges. While the MacBook’s hinges are tested for 50,000 actions, the threshold is doubled for the folding phone because it’ll have to be folded and unfolded way more than a MacBook.

Apple also has patents for foldable phones, but we can’t say which design(s) will see the light of day. However, the patents cover three different types of foldable, including a flip design like the Samsung Galaxy Z Flip, a folding design like the Galaxy Z Fold, and a two-fold design. Android has already ushered into the fold and flip design with Samsung, LG, and Motorola heading the spectrum with some crazy designs. It’s only a matter of time before Apple also includes a fancy folding gimmick to the iPhone lineup.

One thing that must be noticed when talking about folding phones is the price. Both Samsung and Motorola flip phones cost over $1,000, which is also the price at which the current flagship iPhones are touching. However, the last time Apple came up with the design overhaul, the prices saw a steep increase. So it’s safe to say that the Cupertino giant’s foldable iPhone might be a part of a more luxurious lineup in the future.

It’s still early to evaluate Apple’s plan or even be sure of seeing a foldable iPhone in 2022. However, with the patents secured and reports of testing coming up, we can expect a folding iPhone or maybe a folding iPad in the near future.

How the Zoom new feature “At Risk Meeting Notifier” Works