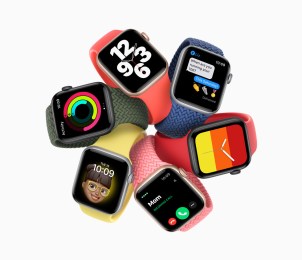 According to Apple, the Watch SE arrives as a successor of the Watch Series 3 that debuted three years ago, and it retails for a price lower than that of the new Series 6.

As for the internals, the Watch SE comes with the S5 System in Package. And it relies on a dual-core processor, which according to the company, performs two times better than that in the Watch Series 3.

It arrives pre-installed with the WatchOS7 and a new activity app called Fitness Plus. The app provides the user with virtual workout classes and helps in tracking workout sessions.

Fitness Plus happens to be the first fitness service designed for the Apple Watch. On getting the Watch SE, you are entitled to three months free access to the app after which you’ll have to pay $9.99 per month to continue using it.

Also, the Watch SE’s display is 30% larger than that of the Series 3. The smart device is compatible with all Apple Watch straps, including the new Solo Loop and Braided Solo Loop bands that Apple just unveiled.

The Watch SE would be available is cellular models. So, the watch can make emergency calls, both locally and internationally, using the built-in emergency SOS feature.

The GPS model of the device starts at $279, and the cellular model carries a price tag of $329.

Watch GT 2 Pro to be the first smartwatch to equip Hongmeng OS, as it’s set for launch