Best VPN For Streaming And Surfing in the USA 2022

Do you want to know what’s the best VPN for the USA? Whether you’re concerned about your privacy, looking for increased security or keen to access streaming services abroad, a Virtual Private Network (VPN) can help. By connecting to the Internet through a secure VPN link to a provider’s server, you can protect yourself against snoopers and hide your activities from prying eyes. What’s more, with a VPN you can appear to be using the Internet in another area or even country, which can help you access otherwise blocked services at home or while abroad.

How to Pick the Best VPN for the USA

Internet users in the United States have a high degree of freedom over what websites they visit and which services they use, but that doesn’t mean that they don’t need a VPN. Recent years have seen increased levels of concern over potential surveillance and threats to privacy, not only from federal and local authorities but from corporates that might track your Internet behaviour and even ISPs who now, thanks to changes in the law, can sell specific user data to third parties.

You’ll find general advice on choosing a VPN in How to buy the best VPN [URL here]. In the United States, your key concerns are likely to be privacy, security and protection from snooping, so we’ve focused on VPN providers that deliver a high level of protection and have a strong presence in North America to ensure good performance. We’ve also picked providers that either don’t keep logs, or that have clear, transparent policies to cover what they log, why they log it, and who they can share that information with. Some providers offer additional protective features beyond the basic VPN, while we also mention those who take payment via a less traceable currency like Bitcoin.

The other reason US Internet users might need a VPN is to stream content from certain non-US streaming services, such as the UK’s BBC iPlayer, or to access TV and video streaming services while on holiday or travelling abroad. For instance, Netflix, Hulu, HBO Now and a range of other free and paid sources won’t stream to IP addresses outside of US territory, even to a user with a US-based account. By disguising your true location, a VPN can make it look like you’re streaming from America.

ExpressVPN is the best VPN for the USA because it provides the whole package. Both the computer and mobile apps make it easy to obtain a US IP address. And if you ever need help, there’s support on hand available 24/7.

It offers fast speeds for buffer-free streaming. ExpressVPN is great at unblocking streaming platforms such as Netflix, Disney Plus, Hulu, Amazon, YouTube, Peacock, iPlayer, and so much more.

This VPN has more than 3,000 servers in 160 locations, so you can access content wherever you may be in the globe. It has excellent encryption and features an automatic kill switch to protect your data. So besides streaming services, you can also use it to make browsing on public Wi-Fi more secure. You can feel safer knowing that hackers or third-party eavesdroppers won’t be able to snoop what you’re doing online. ExpressVPN itself doesn’t keep logs, so you don’t have to worry about privacy.

While it might be more expensive than other VPNs, you’ll get what you pay for. You’ll get fast speeds, a wide array of locations, and secure browsing. It even comes with a 30-day money back guarantee. To maximize your savings, we recommend subscribing to the annual plan. As of April 2022, a one-month subscription costs $12.95. Compare that to the annual plan (12 months plus 3 months free if you purchase using our links) which will only cost you $6.67 per month. That’s 49% savings!

These are the reasons why we consider ExpressVPN as the best VPN for the USA.

2. Nord VPN: A close runner-up for the best VPN for the USA

If you’re looking for the best overall balance of privacy features, security, performance and price, Nord VPN is hard to beat. It’s global reach is impressive, with over 1400 servers in 61 countries, including 562 in the U.S. It delivers decent performance, with speeds dropping by 30 to 35% with nearby servers. However, with a 64% drop in speed when using US servers from the UK, it’s not the fastest option if you’re travelling abroad.

Nord VPN is based in Panama, which isn’t part of the fourteen eyes network and has no mandatory data retention laws. Nord VPN also claims a strict no logging policy. Beyond this, it offers optional double encryption and dual-hop VPN for added privacy, strong DNS leak protection and a killswitch feature. For added obfuscation, you can also route traffic via the TOR network using an Onion over VPN server. Nord VPN might not a cheap VPN, but you get exactly what you pay for. 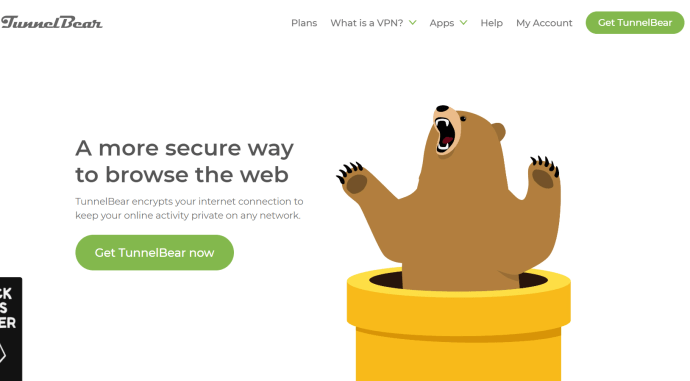 TunnelBear combines low prices, strong privacy and security features and a surprisingly lovable UI, making it one of the most attractive VPN packages around. As a bonus, you can use it for free if you keep the traffic below 500GB per month, which may be fine if you only want occasional use of a VPN. Tunnelbear has over 900 servers in over 20 countries, and as it’s based in Ontario, Canada, it has North America well-covered. It’s also one of the fastest services we tested for connecting to the US from abroad, with just a 62% reduction in connection speeds against the average of 68%.

TunnelBear doesn’t log activities and has one of the clearest privacy and information policies around. While Canada is part of the five eyes network, TunnelBear specifies how it will deal with any requests from government or law enforcement, putting customer privacy first. Tunnelbear also goes above and beyond normal protection, with a Vigilant mode that kills all connections if the VPN connection is disrupted, plus a Ghostbear function that scrambles VPN communications, making them harder to spot and block. A great VPN with a likable attitude.

4. Hide My Ass: The best VPN for travel

Price: $4.99 per month with annual contract

Obviously, the best thing about Hide My Ass is the name, but look beyond that and the slick, donkey-flavoured UI and you have a VPN that ticks nearly every box. HMA has servers in over 280 locations across 190 countries, including 174 servers in the US. It’s easy to use, with an Instant Mode that takes you straight to the closest, fastest server, a Freedom Mode for use in countries that routinely block or censor, and a Location Mode where you can pick your country and location. Hide My Ass’s new Liberty Island location also gets past Netflix blocking.

Speeds are consistently impressive, but when using US servers from the UK we only saw a 36% reduction in connection speed; well above the 68% average. General protection features are good as well, with a killswitch and options to double-hop from one VPN sever to another to cover your tracks. The only sticking points are that HMA is based in the UK – a member of the core five eyes network – and keeps logs, though HMA claims it doesn’t store or monitor the websites you visit or the services you connect to. All the same, this isn’t the ideal service if anonymity is your main concern.

IPVanish is another VPN with a wide global reach, with over 850 servers in some 60-plus countries, serving up over 40,000 VPN IPs. 383 of these servers are based in the US, which makes sense as IPVanish is a US company. That might be a problem if you’re looking for maximum privacy and anonymity, though IPVanish has a no-logging policy and accepts Bitcoin for anonymous payments.

IPVanish’s PC client is quite sophisticated, giving plenty of control over nearly every aspect of the service. You can pick a country and let the app pick the optimal city and server, or configure both yourself. There’s a killswitch to drop all connections should your VPN link be disrupted, and you can set IPVanish to switch IP addresses every 45 minutes, and for added protection it can use its own DNS servers. Provided you’re comfortable with a US-based service it’s one of the best, though it’s a little slow when accessing stateside servers from abroad; we saw a high 72.5% reduction in connection speeds, though closer connections stayed in the 33% to 36% range.

If you want to access streaming content from the United States wherever you may be located and stay private and secure at the same time, you should get the best VPN for the USA. It will hide your IP address, unblock streaming sites, mask your online activities from snooping ISPs, and make sure your data is secure. Take your pick from the VPNs listed above and you’ll be good to go.