BlackBerry to terminate its partnership with TCL on August 31 2020 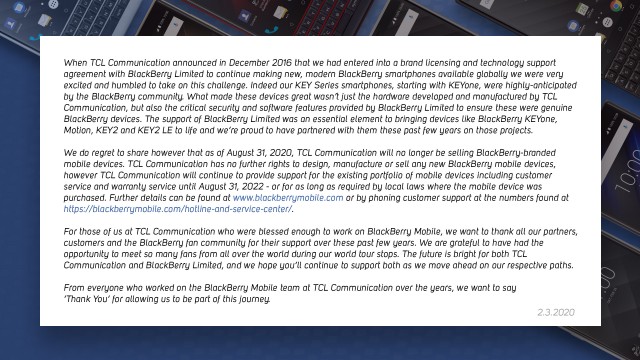 The Canadian multinational company specialising in enterprise software and the Internet of things. which was originally known as Research In Motion (RIM) but best known to the general public as the former developer of the BlackBerry brand of smartphones, and tablets.

BlackBerry was one of the most prominent smartphone vendors in the world, specializing in secure communications and mobile productivity, and well known for the keyboards on most of its devices.

BlackBerry phones are going to the big electronics store in the sky – the company just announced that its partnership with TCL(a partially state-owned Chinese multinational electronics company headquartered in Huizhou, Guangdong Province. It designs, develops, manufactures and sells products including television sets, mobile phones, air conditioners, washing machines, refrigerators and small electrical appliances) will come to an end on August 31. After that, TCL will no longer have the rights to design, make and sell BlackBerry-branded devices.

Existing customers don’t need to worry, as TCL will provide customer service and will handle warranties until August 31 2022 (or as long as is required by your local laws).The BlackBerry-TCL partnership dates back to 2016 with the first phone, the first wave of devices featured the DTEK50, DTEK60 and BlackBerry Keyone. These were designed and built by TCL and ran secure software by BlackBerry.

Note that this isn’t the end of the road for BlackBerry, the company. It still offers secure enterprise services and owns QNX, a popular OS for automotive applications. Plus, some other manufacturer might take up the BB mantle.

Is this final death knell for a mobile legend, which started as Research in Motion (RIM)? Its first product was the Inter@ctive Oager 900, unveiled in September 1996. The “BlackBerry” name is due to the BlackBerry 850 pager from January 1999 whose keyboard reminded the RIM team of the fruit. The last BlackBerry phone prior to the TCL deal was the Priv.

TCL recently started marketing phones under its own brand. It also has the license to use the Alcatel brand until the end of 2024 (Alcatel-Lucent itself is owned by Nokia).