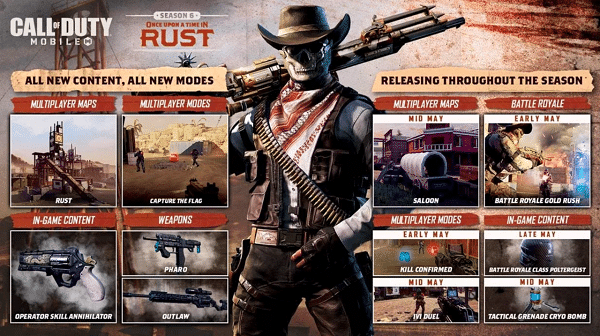 Also, with the launch of Gold Rush event, Call of Duty Mobile introduced Treasure maps in Battle Royale to mine Gold Bars in the game.

There are a few things that are yet to come, starting with the brand new ‘Saloon’ map, which will be available in mid-May. As we are talking about the Multiplayer mode of the game, 1v1 Duel mode, and Cryo Bomb will also release along with the Saloon map.

As of Battle Royale, a whole new ‘Poltergeist’ class is coming in late-May.

There are a lot of other changes coming to Call of Duty Mobile. But, the most important of all is a new progression system to give more challenges to players who’ve already reached the max level.

Finally, here is the list of all the events running or coming soon is Call of Duty Mobile…

Why Microsoft Surface Laptops Does not Have Physical Camera Shutter