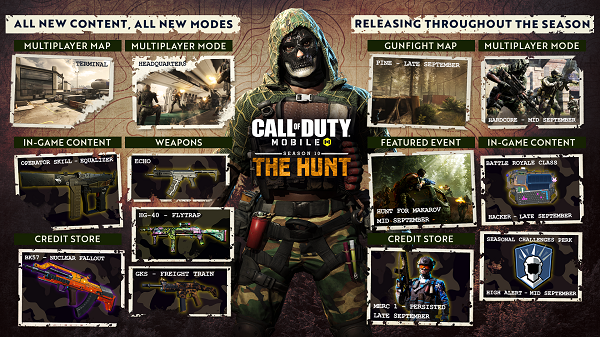 Recently, Call of Duty Mobile released Season 10 of the game, which is titled ‘The Hunt.’ The new season introduced a bunch of new content, including the brand new ‘Terminal‘ Multiplayer map. Also, the much-awaited ‘Equalizer’ operator skill is finally available to play in Call of Duty Mobile.

There is still a lot of promised content that is yet to release in Season 10. For instance, players are still wondering that when is the new ‘Hacker‘ Battle Royale class going to release. Well, recently, Call of Duty Mobile released the Season 10 Roadmap to answer that question.

For those of you who don’t know, the ‘Hacker’ class will allow players to block the gadgets and abilities of the nearby enemies. Also, when the Hacker class is active, the enemies won’t see anything on their minimap, which will make them vulnerable for a limited time.

Call of Duty Mobile has already released a bunch of new content with the launch of Season 10. However, COD Mobile will shower more content upon us throughout the new season; and below is the complete roadmap for the same: