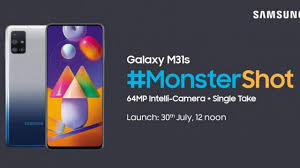 It was rumored lately that the upcoming Samsung Galaxy M31s made claims that the smartphone will be officially announced on July 30. Before now, speculations have been made about the specs of the device as the company is yet to release the Galaxy M31s details.

The smartphone’s microsite went live on Amazon India last week, but the page didn’t reveal much about the phone except for pictures of its front and back view.

According to a reliable tech tipster has shared vital information about the Samsung Galaxy M31s on his twitter page. Details like the camera configurations, RAM, storage capacity, price, and colour options were revealed.

On the front side, a 32-megapixel selfie snapper is housed in the true punch-hole located at the top of the display.

Talking about the display, the phone will sport a 6.5-inch S-AMOLED display. It supports Full HD+ resolution and offers a pixel density of 407ppi.

The same Exynos 9611 chipset that powered the Galaxy M30s and Galaxy M31 smartphones will drive the Galaxy M31s. The phone is backed up by a massive 6,000mAh battery. It will carry support for 25W fast charging technology.

The Samsung Galaxy M31s will debut with a USB-C charging port. The phone will be available in Mirage Black and Mirage Blue colour choices. It will reportedly carry a price tag of Rs. 20,000, which approximates to about $267.

Jobberman partners with Mastercard to resolve unemployment in Nigeria

How to download and install ACMarket App for Android