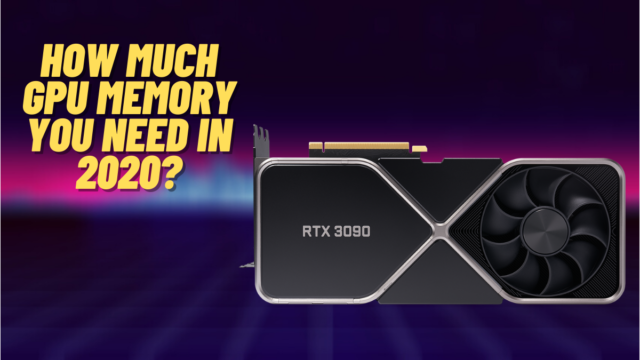 “How much GPU memory (VRAM) do you need for gaming in 2020” is an important one, especially because next-gen consoles, including the PS5 and Xbox Series X, are here to push the graphical boundaries and make 4K gaming the norm. Graphics Processing Units or GPUs nowadays sport 4 GB to 24 GB. We have a graphics card for gaming, editing, mining, and content creation. But before we go on to describe how much memory you need, let’s understand what is the function of GPU memory or VRAM in the first place.

There are plenty of articles out there that go into the detail of the subject matter, so I will instead give you an overview of how a GPU works and the role of virtual memory with it.

How A Graphics Card or GPU Works?

A GPU has graphic cores that render or stitch together the graphical frame that we see on our screens. The frame, once rendered, stays in the virtual memory before it can be displayed on the screen. As the resolution or size of the frame increases, the requirement for higher GPU memory increases as well.

For example, if you want to run Assassins Creed Valhalla smoothly at high graphical settings at above 60 FPS, an Nvidia RTX 3080 10GB GPU will see around 7GB of its memory consumed. You can see it in the benchmarks below. What makes a frame big in size, is not just the resolution but also the amount of graphical details it has. Keeping the resolution same, a frame with high graphics on Ray Tracing, will be bigger in size as compared to a frame with low settings.

One more point to note here is that the virtual memory alone does not make a GPU better or worse. The rate at which the GPU cores can render the graphics is also important. It is why 10GB or 12GB of virtual memory is reserved for the top-spec graphics card with high GPU cores. Because entry-level GPUs lack the processing power to render frames at high speed, virtual memory starts acting as a bottleneck.

Furthermore, factors like CPU, operating temperature, power supply, and RAM also play an important role in determining a GPU’s performance. A faster GPU will need a faster CPU and a bigger power supply. So as a general rule, if you can’t afford expensive PC components, in the long run, it’s better to have a faster CPU instead of a faster GPU.

So in the future, you can have enough CPU headroom to upgrade to a better GPU. But if you opt for a weak CPU instead, chances are you’ll likely end up replacing your motherboard as well. Mainly, because newer CPUs tend to require new motherboard sockets. Whereas the PCI-E slot for your GPU will always remain the same on every motherboard, meaning you can swap your old GPU for a faster new one.

How Much GPU Memory Do You Need For Gaming In 2020?

If you wish to play games at 1080p resolution and high graphical settings, your potential GPU must have 8GB of memory. However, if you love 4K gaming, then no less than a GPU with 12 GB graphics memory will suffice. Here are a few examples of recent games for us to understand this requirement better.

Benchmarks are courtesy of the YouTube channel Jansn Benchmarks.

These results are from a wide variety of games including AAA action-adventure titles with an open world and lots of details to a smaller less graphically intensive e-Sports title. Overall, the picture is clear. You can see that as the resolution increases the video memory utilization goes up as well.

What’s particularly interesting is that in all these next-gen titles, except Overwatch, the least amount of GPU memory used was closer to 8 GB.

With newer games like AC-Valhalla, Godfall, and Dirt 5 using around 6-7 GB of video memory at 1080p resolution, it is an indication that your GPU should have at least 8GB of GPU memory in 2020.