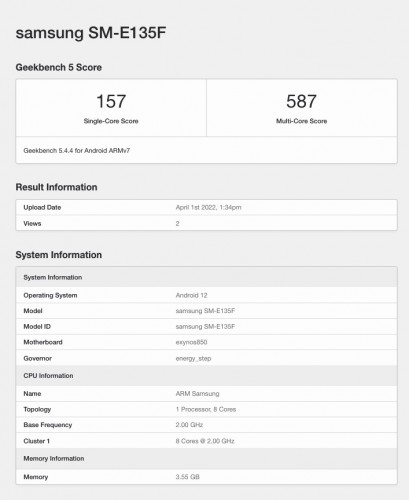 It seems Samsung is going to bring a successor to last year’s Galaxy F12 soon with the aptly named Galaxy F13. The upcoming device was spotted on Geekbench bearing the SM-E135F identifier. The phone managed 157 single-core points and 587-points on the multi-core test – values that will surely increase as the device gets closer to its launch

Geekbench revealed the phone brings the same Exynos 850 chipset that was found in last year’s Galaxy F12 alongside 4GB RAM. The phone boots Android 12 which should be joined by One UI 4 on top. Based on speculation, Galaxy F13 will be a rebadged Galaxy A13 meaning the upcoming phone should bring a 6.6-inch LCD with FHD+ resolution, a 50MP main cam and a 5,000 mAh battery with 15W charging.