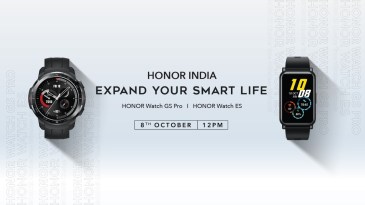 Huawei sub-brand, Honor,  recently announced that it would unveil the much-anticipated Honor Watch ES and the Honor Watch GS Pro on October 8.

The launch event took place in India. As expected, they debuted for a lesser price than their respective cost in Europe.

However, many looked forward to Honor unwrapping the Honor Choice True Wireless Buds. A teaser of the wireless buds hinted that it would roll out alongside the smartwatches, but it seems the brand has something else in mind.

The Earbuds may debut alongside a yet-to-be-announced smartphone from Honor.

The Watch GS Pro is the first-ever rugged watch to debut under the Honor brand name. It launched for the European market at the IFA 2020.

The device features a circular 1.39-inch AMOLED display panel, in-built GPS, Bluetooth feature, and it boots to the LiteOS.

Also, it is MIL-STD-810G certified, which guarantees its durability.

Besides, the watch comes pre-installed with over 100 workout modes and houses a battery, which offers the user 25 days of usage.

In India, the watch arrived with a price tag of ₹17,499, and it will sell exclusively on Flipkart. The Honor Watch GS Pro will be available from October 16, which is when Flipkart will hold its Big Billion Days sale.

The Watch ES breaks record as the first smartwatch from the brand to feature a rectangular display. The AMOLED panel has a dimension of 1.64-inch.

The Watch ES has a sleek design, and it is comes loaded with 12 animated workout courses.

The smartwatch carries a price tag of ₹7,499 in India. It will be exclusive to Amazon India and will go on sale on Amazon Great India Festival sale.