As the news is quite beaming, you should also take into account that the new dedicated app doesn’t appear to support streaming rates above 720p. But you will still enjoy all the features along with offline viewing.

Streaming the Prime video contents at 720p is similar to what the service is offering on the iPad version, but it is still incomparable to the 1080p HD through a web browser.

Amazon listed the Prime video app as 4K UHD in the app itself, but the company mentioned that the app can stream and download up to 1080p HD, but may vary per content.

Fire TV is for those that have invested in watching movies from TV, but with the new Prime Video app on a laptop or desktop PC, the company is breaking its way out of the browser domain.

How do I install Amazon Prime on Windows 10 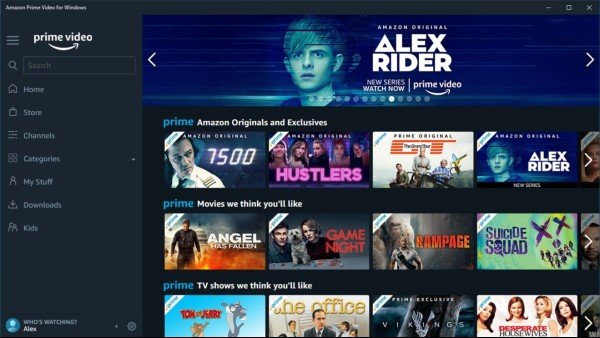 In order to start using the dedicated app on your Windows 10, you have to download the Amazon Prime Video for Windows 10 from Microsoft Store. Install, login and you are good to go.

You can also install Amazon Prime Video as a PWA on Windows 10. PWA is a progressive web application software that delivers through the web. Amazon also released a web app for its shopping portal and a music app for Windows 10.

In order to install the Amazon Prime Video app on Windows 10 as a PWA, you have to go to Primevideo.com using only the new Microsoft Edge browser based on Chromium. Then select the menu button on the top right corner denoted by three horizontal dots.

Proceed by select apps > Install this site as an app. Then it will be installed as an app with a XAML shell on your Windows 10 computer. Go to the All apps list in the Start Menu, and create a shortcut for it on the desktop page. Also, note that this app won’t work offline.

With the Windows app, you will enjoy better streaming experiences, downloading for offline mode, renting TV shows, movies, and many more, but you need Windows 10 version 17763.0 or higher, and it will run on both x86 and ARM versions of Microsoft’s operating system.

Amazon also introduced a Watch Party feature in the US so up to 100 people can stream with friends. Well, it is quite better for Amazon Prime video users, as most of the questions from the internet such as this will be answered:

It is still better than the YouTube TV with another hefty price hike, which is now $65 per month. But Amazon is reportedly pursuing its licensing deals for live TV actively.

In order to be among major competitors such as Netflix, Hulu, Amazon has added more original streaming content shows like Fleabag, The Marvelous Mrs. Maisel, and Homecoming.

There are a series of benefits and features of using Windows 10, but attached to that are the disadvantages, but it is safe to say that streaming video content via the new Prime Video app is quite advantageous.

*. You can now download videos to watch offline
*. You can rent or buy thousands of titles including new release movies, popular TV shows, and more
*. With Prime Video Channels, Prime members can subscribe to more than 150 premium and specialty channels like HBO, SHOWTIME, STARZ, and Cinemax.
*. You can only pay for the channels you want, no cable required, cancel anytime
*. With X-Ray, view IMDb information about the actors, songs, and trivia for videos as you stream.

Another amusing idea that goes in line with the new dedicated Prime Video Windows app, is allowing you to download videos on a Windows device to view offline. It was not possible with the browser version, it is still the same with other video streaming service, such as Netflix.

However, you can download your favorite content in three tiers for video quality, Good, Better, and Best, with each tier using progressively more storage. The app does not indicate the corresponding resolution to each tier. We recommend that you leave a large empty memory space for surprises.

TikTok ban message is an error, Amazon said to employees

How to contact Airtel customer care in Nigeria and India