How To Play Harmony Square Game 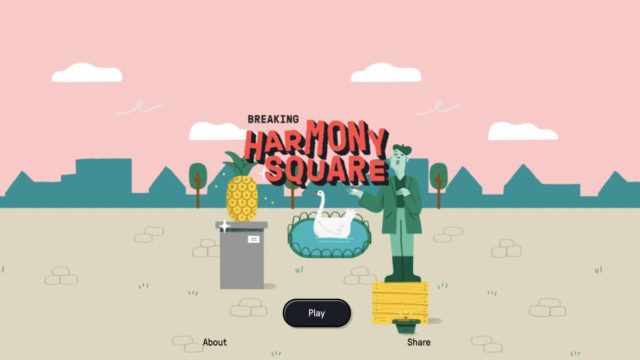 Psychologists from the University of Cambridge have launched a free-to-play video game dubbed Harmony Square. The gameplay is set around a small town, named after the title of the game, that’s “mildly obsessed with democracy.”

The aim behind the game is to expose players to the common techniques used to spread fake news and misinformation. So that when they are exposed to it in the real world, they already know how to spot one and disregard it.

How To Play Harmony Square: The ‘Fake News’ Game

As a player, you’re hired as the “Chief Disinformation Officer.” Your aim is to turn the residents of the town against each other by spreading fake news through various mediums.

Harmony Square has 4 different levels, during which, players gets to learn the 5 techniques used in the real-world to mislead people.

These are — provoking outrage by trolling, encashing on the emotions of the population to invoke anger and fear, seeking the help of AI and computer bots to amplify the reach of fake news, polarizing audience, and spreading conspiracy theories.

To create the game, the University of Cambridge collaborated with the US Department of State’s Global Engagement Center and the Department of Homeland Security’s Cybersecurity and Infrastructure Security Agency (CISA) branch.

“The game itself is quick, easy and tongue-in-cheek, but the experiential learning that underpins it means that people are more likely to spot misinformation, and less likely to share it, next time they log on to Facebook or YouTube,” said Dr. Jon Roozenbeek, a Cambridge psychologist and lead author of the study.

Harmony Square has been backed by several studies conducted by researchers at the University of Cambridge. It has proven to affect the judgment of people when it comes to spotting fake news.

In the controlled study, it was found that 63% of the players that played Harmony Square found misinformation less reliable when exposed to it in the real life. The game also reduced willingness to share fake news with others by 11%.

More importantly, the game does not consider any political bias. The stats hold true for both left-leaning as well as right-leaning political ideologies.

We are living in a digital era and spreading fake information in today’s world is a cakewalk. Games like Harmony Square bolster the efforts put in by several agencies in controlling and minimizing the spread of misinformation.

SpaceX Starlink Internet: All you need to know