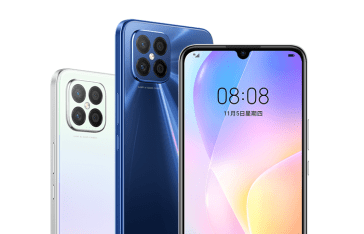 The Nova 8 SE features some cutting-edge upgrades, unlike its predecessor. It arrives with an OLED panel as against the LCD on the Nova 7 SE.

It also has support for the same rapid charging technology featured on the Huawei Mate 40 series smartphones.

The Nova 8 SE comes with a 6.53-inch OLED screen that has a 20:9 aspect ratio and supports a Full HD+ resolution. It arrives with an under-display fingerprint scanner for unlocking the device.

On the inside, the Dimensity 720 chipset drives the base model of the all-new Huawei Nova 8 SE. The processor has support for 4G + 5G dual SIM connectivity.

Meanwhile, the higher variant of the Nova 8 SE features the Dimensity 800U processor. It allows for 5G + 5G connectivity.

Both variants of the Nova 8 SE feature 8GB of LPDDR4x RAM and 128GB of UFS 2.1 storage. It offers the user with storage expansion via a dedicated MicroSD card slot.

However, the two chipset variants of the Huawei Nova 8 SE carry the same specifications despite the different processors.

The Nova 8 SE has a 16-megapixel front-facing shooter that allows the user to take selfies and make video calls.

On the backside, the Nova 8 SE packs a square-shaped module that houses the rear quad-camera system.

For software, the handset boots to the EMUI 10.1 UI based on Android 10 OS.

The Nova 8 SE will be available for pickup in silver moon start, magic night black, and sakura snow clear sky.