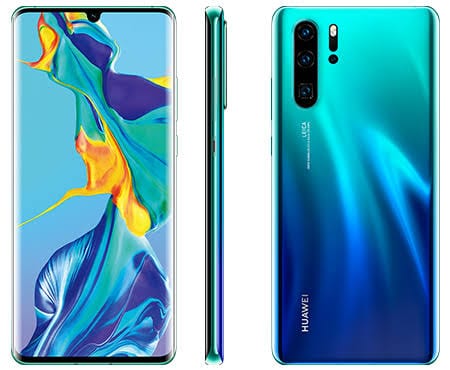 It comes with a four-camera array that will make “its competitors calling for emergency meetings”. Those were the exact words Huawei used in describing the premium smartphone. Elsewhere, the battery compartment is one that doesn’t eschew from more than a day’s job of heavy duty.

Measuring 158 x 73.4 x 8.4 mm, the Huawei P30 Pro is one of the slimmest flagship smartphones around. The stylish curve to the edges of its Gorilla Glass-covered screen reminds you of the edgy Samsung Galaxy S10 Plus. However, its teardrop notch brings you back to the awesome Huawei reality.

Like the Huawei P30, both sides of the phone are wrapped in Corning Gorilla Glass, and there’s a fingerprint sensor incorporated beneath the display. However, the increased cameras at the rear are the main contrasting feature between the two siblings.

Top and bottom bezels are minimal in order to accommodate the 19.5:9 aspect ratio of the touchscreen. The smartphone now enjoys a larger 6.47-inch OLED display with the same resolution of 1080 x 2340 pixels.

Breaking the 4K shackles, the Huawei P30 Pro is powered by a 4,200mAh battery. Extensive battery life is secured so also is the rapid charging speed.

Within 30 minutes, the smartphone charges from 0% to 70% while an additional 30 – 40 minutes takes the phone to 100%. Wireless charging, as well as Reverse Wireless Charging, are supported on the smartphone.

Excellence is the watchword for the smartphone’s photographic elements. The Leica cameras are arranged in a triple horizontal arrangement and one sensor under the LED flash.

The latter happens to be the ToF 3D camera that conducts 3D depth mapping for bokeh images.

For the meal of the day, the 40MP wide-angle shooter employs the same Spectrum feature as its sibling. It utilizes RYYB sensor (Red, Yellow, Yellow, and Blue) to absorb more lights, thereby leading more vivid colours and better photos in low light.

Assisting sensors in the array are the 8MP telephoto sensor and 20MP ultra-wide. The camera is loaded with 10x hybrid zoom which includes a combination of optical and digital zoom. It supports 50x digital zoom giving you quality images of objects that are far off.

Night mode and Portrait mode are some of the most enjoyable features on the device. Up front, the 32MP shooter is a no-brainer for impressive selfies.

Distributing the instructions for actions on the Huawei P30 Pro is the Kirin 980 SoC. Its tasks are backed by a 6GB or 8GB RAM depending on the choice you make. Similarly, the internal storage offers up to 64GB, 128GB or 256GB.

Whatever model you select, an NM card can increase the phone’s storage to 256GB. It runs out of the box with the Android 9.0 Pie and the EMUI 9.1 skin.

Huawei P30 Pro price in Nigeria starts at around 282,000 Naira. You can buy the smartphone at leading online stores in the country.

Here are a few specs of the Huawei P30 Pro:

How to use the Whatsapp Fingerprint lock feature