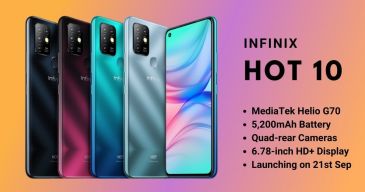 The Infinix Hot 10 succeeds the Infinix Hot 9 that launched in May. It arrives with a massive 6.78-inch TFT LCD with a punch-hole at the top-left corner.

Like its predecessor, the screen on the Infinix Hot 10 also supports an HD+ resolution of 720 x 1600 pixels.

Under the hood, the MediaTek powered Helio G70 chipset drives the handset. The processor is accompanied by 4GB / 6GB of RAM and 64GB / 128GB of native storage.

For the lenses, the on-screen punch-hole shelters an 8-megapixel selfie snapper, which allows the user to take selfies and making video calls.

On the other hand, the phone features a quad-camera setup which includes a 16-megapixel primary sensor, a 2-megapixel macro lens, another 2-megapixel depth assist sensor, and an AI lens.

Out of the box, the Infinix Hot 10 boots to the XOS 7.0 based on Android 10. The device houses a fairly large 5,200mAh battery which supports only 10W of charging through a MicroUSB port.

On the connectivity side, it features dual-band Wifi support, Bluetooth 5.0, MicroUSB port, and a 3.5mm audio jack.

Other features on the smartphone includes a MicroSD card slot, which allows for up to 512GB of storage expansion, DTS Audio, and a rear fitted fingerprint sensor.

Pricing  of the Infinix Hot 10

The smartphone arrived in Pakistan in three variants such as;

Starting from September 28, the Infinix Hot 10 will be available for purchase in colour editions like amber red, moonlight jade, obsidian black, and ocean wave colours.