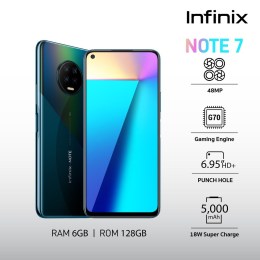 Infinix, announced the newest member of the Note series, the Infinix Note 7 in April. Following the announcement, many expected the phone to roll out a few weeks after, but, unfortunately, the firm had no plans to take the cover off the smartphone yet.

Infinix is already putting plans in place to launch the much-anticipated Infinix Note 7 officially in India. The brand recently confirmed that it would be hosting a launch event for the Note 7 smartphone in India on September 16.

Since the announcement of the Note 7 in April, its specifications are no longer a mystery. The phone would arrive with a 6.9-inch IPS LCD that supports HD+ resolution. The screen has a punch-hole design and offers a 20.5:9 aspect ratio.

On the inside, the MediaTek driven Helio G70 chipset powers the smartphone. It is coupled with 6GB of RAM and 128GB of internal storage.

It houses a 16-megapixel selfie snapper in its on-screen punch hole, and it carries a circular module on its rear panel for the secondary camera. The module consists of a 48-megapixel main snapper, a pair of 2-megapixel cameras, a dedicated low-light lens, and an LED flash.

The Infinix Note 7 would come pre-installed with an XOS based Android 10 Operating System.