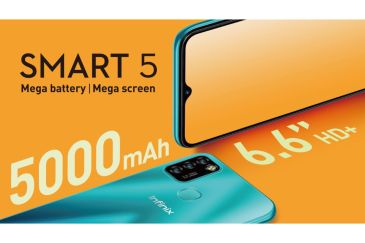 Infinix has continued its journey into the second half of the year following the release of a new mid-ranger. The firm has officially announced the Infinix Smart 5 smartphone in India and Nigeria.

Although the Smart 5 is not a high-end device, it features some attractive specs and details.

On the inside, the phone is powered by a processor with a clock speed of 1.8GHz. Previous reports have hinted that the Smart 5 features the Helio P22 chipset.

In Nigeria, the Infinix Smart 5 will be available in 2GB/3GB of RAM and 32GB/64GB of native storage. The Indian variant of the phone is available in 2GB RAM + 32GB storage space option.

On the connectivity aspect, the handset has support for dual-SIM, GPS, Bluetooth, Wi-Fi 802.11ac, MicroUSB port, and a 3.5mm audio jack.

As for the security, it has a rear-mounted fingerprint scanner few inches from its secondary camera and possesses face recognition features.

On the phone’s back, a 13-megapixel primary camera alongside a pair of QVGA lenses and an LED flash is housed in a rectangular-shaped module.

The front camera has a resolution of 8-megapixels and is located in the on-screen notch. This selfie sensor is accompanied by dual-flash to provide lighting when taking pictures in dark areas.

According to the company, a single charge can last the Infinix Smart 5 for up to 4 days.