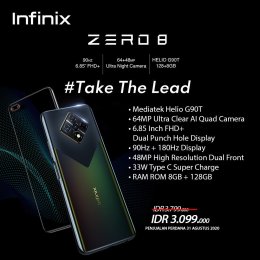 Infinix has been doing well with the Zero-series, and now, the tech giant has announced the latest member of the line-up; the Infinix Zero 8.

Infinix launched the smartphone in Indonesia. The arrival of the Infinix Zero 8 reveals that it is the first phone from a Chinese manufacturer to support a 90Hz screen refresh rate.

Though the phone surfaced as a mid-range device, it packs some attractive features like large display, decent battery size, and high-resolution cameras.

The Infinix Zero 8 has a massive 6.85-inch IPS LCD panel that delivers Full HD+ resolution. The display features a pill-shaped cutout at the top left corner, supports a 90Hz refresh rate, and a touch sampling rate of 180Hz.

The cutout on the screen houses the 48-megapixel + 8-megapixel dual selfie camera system. The primary selfie shooter has 4K capabilities and is optimized to capture videos in low-light conditions.

On the Infinix Zero 8’s back panel, a quad-camera system alongside an LED flash is present in an inclined rectangular-shaped module.

The Infinix Zero 8 debuts with MediaTek powered Helio G90T chipset. The chipset alongside 8GB of RAM powers the smartphone. It comes with 128GB of internal storage.

For storage expansion, the handset has a dedicated MicroSD card slot.

For the OS, the phone runs on the Infinix XOS 7 based on Android 10 OS. It houses a 4,500mAh battery and carries support for 33W rapid charging technology.

Reports have it that the Infinix Zero 8 would arrive in the global market on September 1.

Realme 7 and Realme 7 Pro specs leaks ahead of launch