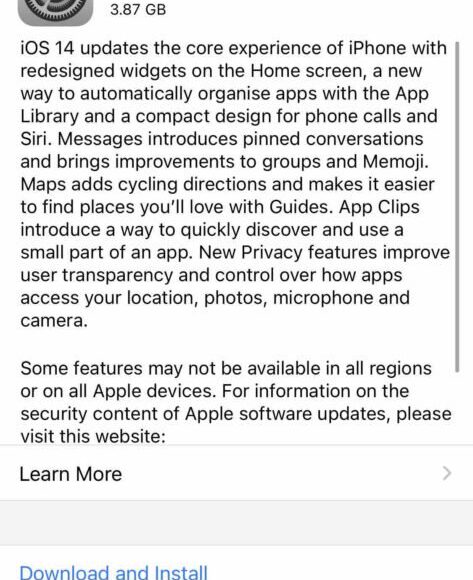 To install the update, go to the iPhone settings > General > Software update and wait for the iOS 14 update to show up. The update is almost 3.5GB in size, more or less depending upon the device that you are using.

Apple first unveiled iOS 14 at the WWDC 2020 event back in June. Up until now, the update was under the beta testing phase, but now all iPhone users can install the iOS 14 stable version.

iOS 14 comes with a redesigned home screen that now supports widgets, something Android users have had for years. The widgets can be shaped into three different sizes through the widgets gallery. You can also add a Smart Stack of widgets where the device intelligently brings up the widget based on your usage.

The other biggest UI change in iOS 14 is the new App Library. It is more or less like an app drawer; only apps are automatically organized into separate folders. Thankfully, iPhone users now have the option to remove entire home pages.

You can now pick up calls without leaving the app, thanks to the new compact call design in iOS 14. One of my favorite iOS 14 features is Picture-in-Picture, which I use to watch YouTube and simultaneously use other apps.

Siri no longer takes up the whole screen, instead waking up Siri brings up a small colorful orb. However, you still can’t interact with what’s behind the screen. Other than that, Apple says Siri is more intelligent and can now answer a broader set of questions.

iOS 14 introduces App clips in which specific features of an app can be used without needing to fully download the app, such as making a reservation at a restaurant, purchasing a coffee, etc.

As for privacy, iOS 14 shows up camera access and mic access indications at the top to inform users in case of misuse. Safari browser has a privacy report where it tells which websites have trackers.

There is also a new separate Translate app that supports text and voice translation from 11 languages. Apart from that, you can finally set a 3rd-party browser and mail app as default.

While regular users are head over heels for iOS 14, app developers are nowhere near happy. Apple generally releases a Golden Master copy so that app developers can do the final touches and get their app ready for the latest version of iOS 14. But this time, Apple dropped iOS 14 out of nowhere, forcing developers to pull all-nighters and rush their apps. Some haven’t received the app’s approval from Apple.