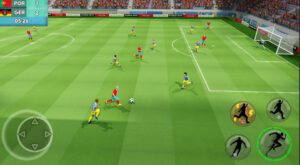 The countdown is over & soccer league season started. You have the world’s best soccer players from all around the world in your team. Excite the crowd with every goal hit, free kick, penalty and backing in free play, pro challenges, penalties, and soccer cup modes. Build your dream soccer team and prove yourself as a hard striker in the live football gameplay, dodge opponent team goalkeeper, and enjoy the thrill of crowed. This game will have you hooked for many challenges as you take your team to the final match. Would you like to play a live soccer game as a real football superstar and start a career as a pro soccer player hero from the start of the tournament to final match victory? Now play the football game with your favorite national soccer team hero and win trophies of each world cup challenge. Improve your dodging technique, shot, and accuracy. Free kick and pass the football to their goalkeepers. Free kicks, penalties, clean football dodging; dribbling with your ultimate team, and your powerful final free-kick, no team player or goalkeeper can stop you. 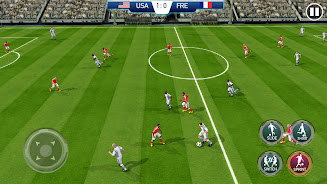 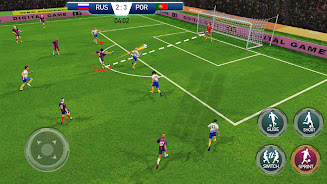 In quick play mode, you need to score maximum goal & win a single match against the opponent team under different time interval modes. Friendly Battle mode where you just have to pick your team and the opponent team and enjoy the real football simulation in this soccer game, or you can play soccer championship & world football league with different teams throughout the semifinal and final.

How to Play & Win the Soccer Super Stars League:
Soccer dream league game has a 4-dimensional camera view to enjoy the game, immersive 3d graphics, and a powerful soccer game engine that will bring your coaching skills on top. Easy and intuitive buttons to control the ball and the multiplayer soccer, Goalkeeper. You can do an accurate pass, quick dribbles, and perfect shoots to score goals and build your way to success. You can also manage your favorite team as a soccer manager and lead it to victory.

Version 1.7.0
– Playing football now get more stuff.
– Improved snatching of ball, player collaboration, team management, team skills added.
– All new football stars arrived in the arena. So what are you waiting for.
– Play new challenges and modes and win world trophies and rewards. Customize your favourite player as you want.
–  Now you can remove ads through special offer.
–  Added special tutorials before each challenge