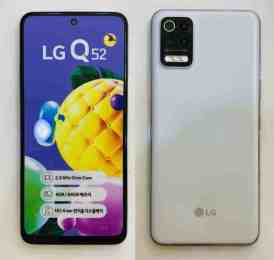 LG unveiled the LG Q51 smartphone early this year. According to various certifications, the news is that LG could be launching the LG Q52, which will arrive as the successor of the LG Q51, soon.

Lots of live shots of the yet to be announced LG Q52 smartphone have appeared in South Korea. It suggests that the launch of the smartphone is near.

The live pictures of the LG Q52 reveal that the volume rockers and power button are present on its left spine, and it features a fingerprint sensor for unlocking the handset on its right side.

The phone comes with a reasonably large display with an Infinity-O design for the front-facing camera.

The smartphone is tagged as a military-grade device because it can withstand impact shock, high temperature, low temperature, humidity, and other environmental conditions.

Inside the punch-hole cutout is a 13-megapixel camera, which allows the user to take selfies and make video calls.

It will ship out with the Android 10 OS installed on it.

The LG Q52 packs a quad-camera system that comprises of a 48-megapixel primary shooter followed by a 5-megapixel wide-angle lens, a 2-megapixel macro lens, and a 2-megapixel depth sensor.

The camera system alongside a triple LED flash unit is housed in a rectangular module present at the top left corner of LG Q52’s rear.

The Helio P35 chipset drives the LG Q52. It would debut with 4GB of RAM and 64GB of native storage. For storage expansion, the phone features a dedicated Micro SD card slot.

A 4,000mAh battery serves as a backup for the LG Q52. Presently, it is unclear whether the phone has support for fast charging tech.

The pricing details of the phone remains unknown, but speculations have it that the LG Q52 could be priced between 300,000 and 400,000 won.