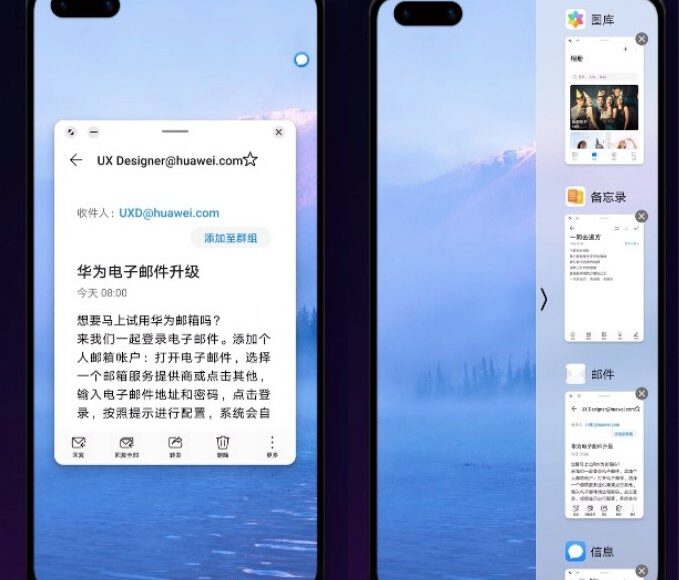 Huawei announced EMUI 11, the next big update to its Android skin, at the recent Developer Conference.

The latest EMUI update from Huawei is not based on Android 11, which is the latest Android version. Nevertheless, it comes with several interesting features such as new privacy options, live icons, improvements in Always-On Display, interface changes and a lot more.

Huawei initially introduced the multi-window feature with EMUI 10.1. In its latest update, Huawei has made major improvements, making it easier for users to multi-task. For instance, you can change an app in a floating window right from the recent apps menu. Moreover, the floating window can be resized, and minimised to a floating bubble.

EMUI 11 brings support for opening up to three multiple windows at the same time while using the Multi-Screen Collaboration feature. Also, the connected device can be used as an external webcam or second screen for the PC. In the latest Multi Screen collaboration update, you can also pick up calls right from the PC.

One of the biggest changes in EMUI 11 is the introduction of Live icons. As the name suggests, several icons in the EMUI 11 user-interface animate when touched. The live icons are spread all over the UI — they can be seen in the notification shade, several default Huawei apps such as the Phone app, Notepad app and more.

The EMUI 11 update also comes with a new synchronized vibrations feature that synchronizes the device’s vibrations with the ringtones.

Huawei has invested a lot of time in improving the Always-On Display (AOD) feature. For those who don’t know, AOD is a feature that enables supported devices to display date, time, weather, and other tidbits of information while the screen is off.

the latest EMUI 11, AOD offers several new designs and tons of new customizations. Once you have selected a design, you can change its color from the given color palette. You can even pull colors from camera snapshots. Apart from this, you can finally use any image, live video, GIF as an AOD design on EMUI 11.

The AOD feature is only available on Huawei smartphones with OLED/AMOLED displays because of their ability to keep light up specific pixels without turning on the entire display.

There have been some big changes to Huawei’s default Gallery app as well. For instance, the layout for the Albums page has been revamped. On the photos page, users can now simply pinch-in to change the month-view layout to day-view layout.

You can now create a new hidden album to store sensitive images. Huawei said that other apps won’t be able to see the images in the hidden album.

Huawei has also introduced an amazing feature in its default Note talking app. You can now extract text from images in the note taking app. This will save you the hassle of using any third-party app to do the same. There is also a option to create a hidden memo.

Huawei also introduced some privacy features in its latest update to EMUI. You will now be notified if apps are using sensitive permissions behind your back. It’s similar to iOS 14’s microphone and camera access indications.

There are new permissions and an option to remove EXIF data from images while sharing them. We will update this article as soon as we get our hands on the EMIUI 11 first beta.

At the conference, Huawei also announced the much awaited HarmonyOS 2.0. The in-house operating system is an alternative to Google’s Android. Huawei said most of its smartphones will run HarmonyOS by 2021 and “devices running the new distributed-technology based EMUI 11 will be eligible for upgrades to Harmony OS.”