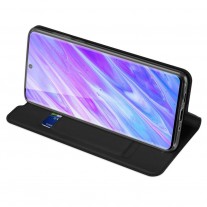 Finnish online retailer Luurinetti has listed cases for the next generation Samsung Galaxy S flagships. They are under the S11e, S11 and S11+ names, though according to Ice Universe these will be unveiled as the Galaxy S20, S20+ and (perhaps) S20 Ultra (the models are promoted one step up so there’s no “e” model anymore).

The camera layout on the Galaxy S20+ does seem to match up with with renders we saw some months ago. The size of the screen also lines up with the rumored spec – 6.7”.

Same with the Galaxy S20, the triple camera with LED flash and a sensor look just like the OnLeaks renders from November. The screen is listed as 6.4”, matching what we’ve been hearing so far. This lends some credibility to the rumors.

The renders for the cases may not be 100% accurate though, especially when it comes to the Galaxy S20 Ultra. It shows the scattered camera arrangement, which contradicts the revised design by OnLeaks (also notice the lack of a periscope camera).

The design shown in the case renders doesn’t even match up between the different S20 Ultra cases, so we’re leaning towards trusting the leakster with the proven track record.