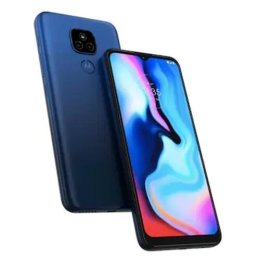 Motorola unveiled the entry-level Moto E6 smartphone in August. Few weeks after the launch, the Lenovo-owned took the cover off a higher variant of the Moto E6, the Moto E6 Plus.

Meanwhile, in September 2020, Motorola announced the Moto E7 Plus, which arrived as the successor of the Moto E6 Plus.

The firm is yet to announce the lower sibling of the Moto E7 Plus, the Moto E7. Now, a piece of new information about the Moto E7 leaked today, and the report suggests that the phone may arrive soon.

The leaked renders of the Moto E7 revealed its design and colour options amongst other features.

The information, which was shared by Abhishek Yadav reveals that the Moto E7 will come in blue and grey colour options.

From the pictures shared, the Moto E7 has a square-shaped camera module that houses two lenses and a flash unit on its back panel.

Below the camera module, the Moto E7 has a round fingerprint scanner with the company’s logo integrated on it.

In the past months, the Moto E7 has bagged approval from several certification authorities like Thailand’s NBTC, TUV, and FCC in the US.

These certifications alongside the recent leaks hint that the arrival of the Moto E7 is near.

The render mentions that the Moto E7 would come with a 6.2-inch HD+ display and a 5-megapixel front-facing camera.

Its back panel packs a dual-camera setup, which includes a 48-megapixel primary shooter and a 2-megapixel lens.

The information did not reveal the chipset that will debut with the Moto E7, but it did mention that the handset will be pre-loaded with the Android 10 OS, and it will house a 5,000mAh battery.