Motorola G9 Plus specification and Pricing Details Leaked Ahead of Launch 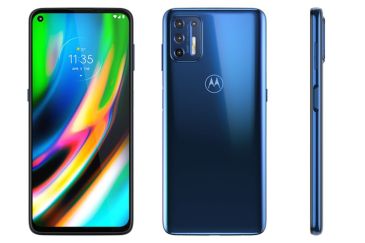 Motorola took the cover off the new Moto Razr 5G smartphone days ago. The company is not stopping there as reports have hinted that it is planning to announce two other smartphones. The devices are the Moto E7 Plus and the Moto G9 Plus.

Winfuture.de has revealed the specifications and pricing of the Moto G9 Plus ahead of its official launch.

The Moto G9 Plus would carry a massive 6.81-inch IPS LTPS display. The screen has a punch-hole design, delivers a full HD+ resolution of 1080 x 2400 pixels, and supports a 20:9 aspect ratio.

The Snapdragon 730G chipset powers the device. Out of the box, the Moto G9 Plus would feature 4GB of RAM and 128GB of native storage. The phone also supports a dedicated MicroSD card slot for storage expansion.

As for the optics, a 16-megapixel selfie camera is housed in the on-screen punch hole. On the rear side, a quad-camera system is present in the rectangular-shaped camera module.

Also, it carries a rear-mounted fingerprint scanner for unlocking the smartphone.

The Moto G9 Plus would arrive with My UX based on Android 10 OS. A 5,000mAh battery, which carries support for 30W fast charging tech, would serve as the handset’s backup.

Price of Moto G9 Plus

According to the leaked render, the smartphone will be available in blue and bronze colour options.