Nokia 5.3 along with two other devices set for launch before the end of the month 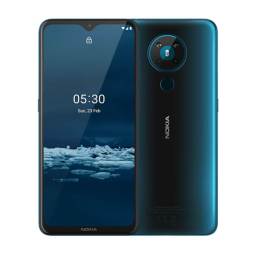 Recently, HMD Global took the covers off several smartphones. The devices were majorly entry-level and mid-range device; they include Nokia 1.3, Nokia 5.3, Nokia 5310 2020, and Nokia 8.3 5G.

After the launch of the devices, the brand listed the Nokia 5310 and the Nokia 5.3 smartphone on its Indian official site.

The Nokia 5310 2020 debuted as a music-centric feature phone and is already available in India. The smartphone retails for Rs. 3,399 in the country.

As of now, the names of the other devices to launch alongside the Nokia 5.3 are still under covers. Although recently, a few Nokia devices such as Nokia TA-1258, Nokia TA-1292, Nokia TA-1239, and Nokia TA-1298 received approval from the Bluetooth SIG.

Meanwhile, the Nokia C3 phone that recently debuted in China is associated with the model number TA-1258.

The Nokia 5.3 sports a 6.5-inch HD+ panel with a waterdrop notch design.

The device will be driven by the Snapdragon 665 SoC alongside 6GB of RAM. Out of the box, the Nokia 5.3 will come with 64GB of onboard storage and Android One UI based on Android 10.

As for the optics, an 8-megapixel sensor is located in the waterdrop notch for taking selfies.

On the back panel, a quad-camera system is located alongside the fingerprint scanner. The phone is backed up by a moderate 4,000mAh battery.