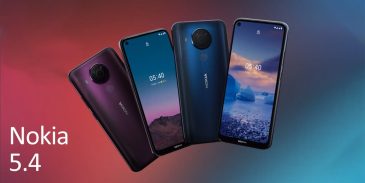 Nokia 5.4 – has officially broken cover in Europe. The new Nokia device arrived as the successor of the Nokia 5.3 that launched earlier this year. Though the handset borrows some features like the round-shaped rear camera module from its predecessor, it does come with some pretty attractive specifications too.

The new Nokia 5.4 features a punch-hole display with a high refresh rate and a tall aspect ratio.

It sports a dedicated Google Assistant key and a rear-positioned fingerprint scanner for unlocking the phone.

For optics, the all-new Nokia 5.4 features a 16-megapixel front-facing snapper. On the other hand, the circular camera module on its rear panel houses a 48-megapixel primary lens followed by a super-wide 5-megapixel camera, a 2-megapixel macro shooter, and a 2-megapixel depth sensor.

Talking internals, the Snapdragon 662 SoC drives the Nokia 5.4. The handset debuted with up to 6GB of RAM, and it offers the user with a generous storage space of 128GB.

Regarding software, the Nokia 5.4 comes pre-installed with the Android One Skin of the Android 10 OS.

The Nokia 5.4’s base variant sells for 189 Euros (~$229), and it will be available in colour choices like dusk and polar night.

Vivo Y30 Standard Edition Launches with a 6GB of RAM, and a 5,000mAh Battery capacity