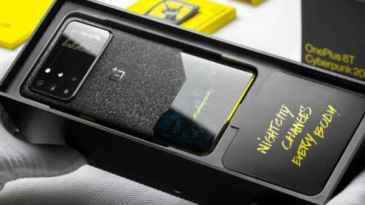 OnePlus has officially announced the Cyberpunk 2077 Limited Edition of the OnePlus 8T smartphone.

It differs from the standard variant of the OnePlus 8T in terms of software and design.

The smartphone has a three-stage pattern on the rear panel. The top side on the back is similar to a window, and it shelters the camera setup.

It also has the inscriptions – ‘NETRUNNER EDITION’, ‘2077’, and ‘NEURAL CONNECTION STATUS: ACTIVE’ – and a barcode from the game, on the top panel.

The middle area of the back panel is an AG glass with an embossment of the OnePlus logo. Then, at the bottom side is a yellow coloured Cyberpunk 2077 logo on a carbon-like surface.

The smartphone comes loaded with the new Android 11 OS based on OxygenOS 11. The operating system supports a unique theme, AOD style, and camera filters related to the game.

The OnePlus 8T Cyberpunk 2077 Limited Edition smartphone is already available for pre-order in China. It will roll out to shelves of retail stores on November 11.