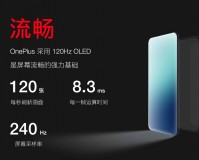 OnePlus held a screen technology communication event today, detailing its new mobile display tech. As per company CEO Pete Lau on Weibo, the technology is now officially out of the research and development phase, which does make it very likely to appear on the upcoming OnePlus 8 phones. As per an industry insider source, we can expect to see the shiny new OLED on the OnePlus 8 Pro. It’s regular sibling will likely be getting a simpler alternative.

The really nifty bit of the story, however, is that OnePlus was nice enough to share some information-dense slides, detailing the new display tech. These are in Chinese, so excuse us in case we miss some small detail.

The star of the show here is, of course, the 120Hz refresh rate. As further guarantee of a smooth experience, OnePlus is also advertising a 240Hz touch sampling rate, as well as just 8.3ms of rendering time for each frame.

Elaborating on this further, we have what OnePlus calls “Smooth Chain”. From what we can gather, it represents a combination of hardware and software optimization along the entire touch input and display output chain, so that the delay between input and response can be brought down as low as possible. Some sort of frame rate smoothing in games, similar to what Huawei has with its GPU Turbo tech seems to be at play here as well, although we don’t really have any specifics yet.

MEMC is another nifty, even if not conceptually new feature. It stands for Motion Estimation, Motion Compensation and is basically a smart frame insertion and interpolation layer that can process lower framerate video up to a simulated 120 fps. This should be done in real time since it is handled by an independent chip on the display itself.

Last, but not least, OnePlus also claims its new display, or rather that of its supplier, since OnePlus does not manufacture panels, is very accurate in a number of ways. The company is using the JNCD (Just Noticeable Color Difference) accuracy metric and claims a value lower than 0.8. Anything below 1 on that scale is considered great.

The new panel is also true 10-bit, for a total of 1.07 billion colors. No mention of HDR support to go along, though. Perhaps OnePlus is still working on certification. Finally, these new panels have 4096 levels of brightness adjustment, up from 1024. This could come in handy for any potential HDR implementation as well.

OnePlus Concept One unveiled with a disappearing camera