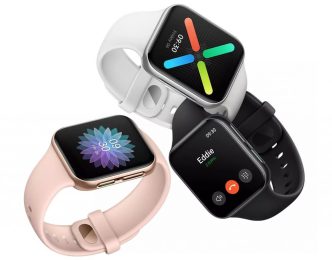 OPPO launched its first-ever smartwatch earlier this year. The smart wearable was named the OPPO watch.

According to a fresh piece of information from Engadget, OPPO will launch the updated version of the OPPO watch by July 31. The source also stated that the smart device would arrive pre-loaded with Wear OS by Google.

OPPO has released a promotional GIF to tease the launch of the smartwatch. At the end of the short clip, Wear OS by Google was seen on a black background, and this confirms the earlier made claims.

Although it was revealed that the new smartwatch would debut on July 31, it seems the watch has launched in Germany already.

The OPPO watch that launched in Germany arrived with some Google-powered applications like Google Pay and Google Assistant. The Chinese variant of the device, on the other hand, featured Ali Pay and Breeno Assistant.

The OPPO watch delivers a screen resolution of 360 x 360 pixels on its 1.6-inch AMOLED display. The display has curved edges and is protected by Gorilla Glass 3.

On the inside, the Snapdragon Wear 2500 alongside the Apollo 3 chipset powers the new OPPO watch. The watch is embedded with 1GB of RAM and 8GB of native storage.

In low power mode, the company claims that the 300mAh battery in the watch can power it for up to 14 days.

Furthermore, the new smart wearable has the capability of tracking activities like cycling, running, and swimming while on the user. It also features heart monitoring, sleep tracking, menstrual cycle tracking, and ECG. The watch will launch at a cost price of 249 Euros.

Jobberman partners with Mastercard to resolve unemployment in Nigeria