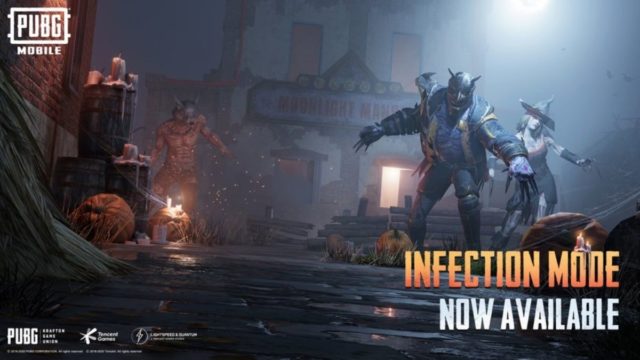 Tencent Games released the ‘Infection Mode‘ in PUBG Mobile to celebrate Halloween 2020. It is an Evo-ground mode that came out last year and instantly became a fan-favorite.

In ‘Infection Mode,’ three players turn into Zombies and try to infect other players through melee attacks. Now, if you’re a Call of Duty Mobile player, then you must know that this format sounds exactly similar to COD Mobile’s ‘Attack of the Undead‘ game mode.

PUBG Mobile’s infection mode consists of three rounds, which are basically about fighting zombies. Before the start of each round, players pick different spots across the map. Then, three players randomly become infected, who have to hunt the defenders only with their hands. Moreover, the infected players get infinite respawns to make things difficult for defenders.

Defenders, on the other hand, can use weapons to kill the infected. However, they will also become a part of the Infected once they get killed by the zombies.

Interestingly, the entire concept of PUBG Mobile ‘Infection Mode’ sounds similar to Call of Duty Mobile’s ‘Attack of the Undead’ mode, with some minor changes. In the Attack of the Undead mode, one player randomly becomes infected before the start of the round. Then, the undead has to infect the survivors by killing them with nothing, but their hands.

‘Infection Mode’ isn’t the only thing that PUBG Mobile’s developer, Tencent Games, picked up from Call of Duty Mobile.

The latest Payload 2.0 mode in PUBG Mobile also features gadgets, such as EMP, Radar, and UAV, already available in COD Mobile’s battle royale. Then, PUBG Mobile’s Sky Temples were clearly similar to the ‘Aerial platform’ in Call of Duty Mobile.

So, you can see why Activision got worried about its intellectual property and broke all ties with Tencent.