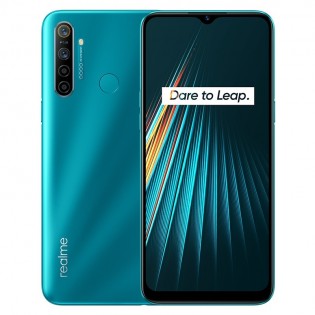 Realme unveiled the 5 and 5i P ro back in August and followed up with the 5s later in November. Now the company has announced it will add the fourth member to the lineup, dubbed Realme 5i, on January 6.

This information comes through Realme Vietnam who took to Facebook to make the announcement. The company didn’t reveal anything else about the 5i, but the smartphone’s listed on Vietnamese retailer FPTShop‘s website with specs and images.

The images confirm the Realme 5i will come in Green and Blue colors and look similar to the 5 and 5s, but the back doesn’t flaunt the crystal design like the other smartphones in lineup.

Realme 5i in Blue color

The Realme 5i shares the specs with vanilla 5, except it comes with an 8MP selfie camera which is a downgrade from the 13MP front-facing snappers on the 5 and 5s.

Realme 5i in Green color