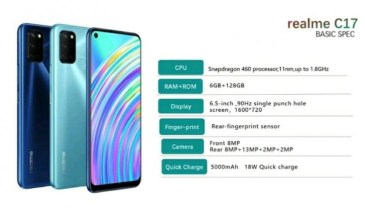 Reports had it  that Realme is planning to unveil a new device named the Realme C17.

And now, the Bangladesh arm of Realme, through its official Facebook page, has shared information about the launch of the Realme C17. The brand revealed that the phone would debut on September 21 by 12 PM (local time).

However, ahead of the launch, a reliable tipster has shared some specs and features of the Realme C17.

The Realme C17 houses a 6.5-inch IPS LCD screen that supports an HD+ resolution of 720 x 1600 pixels. The display offers a maximum brightness of 600 nits, supports a 90Hz screen refresh rate, and delivers a 90% screen-to-body ratio.

On the inside, an 11nm Snapdragon 460 chipset, which has a clock speed of 1.8GHz, powers the Realme C17 smartphone.

The processor is packed with 6GB of RAM and 128GB of native storage.

On the front side, the punch-hole design present at the top-left corner of the display houses an AI-powered 8-megapixel selfie snapper. It supports portrait and AI beauty.

The Realme C17 packs a quad-camera system on its backside. It consists of a 13-megapixel primary camera, a 119° super-wide 8-megapixel shooter, a 2-megapixel black & white sensor, and a 2-megapixel macro lens.

Out of the box, the phone will come pre-installed with the Realme UI based on Android 10 OS. The device houses a 5,000mAh battery that supports 18W fast charging.

According to the firm, the phone offers the user approximately 12 hours of gaming, 19 hours of video playback, 36 hours of phone calls, and 34 days of standby time.

Other features on the Realme C17 includes a USB-C port, a rear-mounted fingerprint scanner, and a dedicated MicroSD card slot for storage expansion.

The pricing details of the smartphone remains unknown as of now, but we do know the phone will arrive in Navy Blue and Lake Green colour editions.