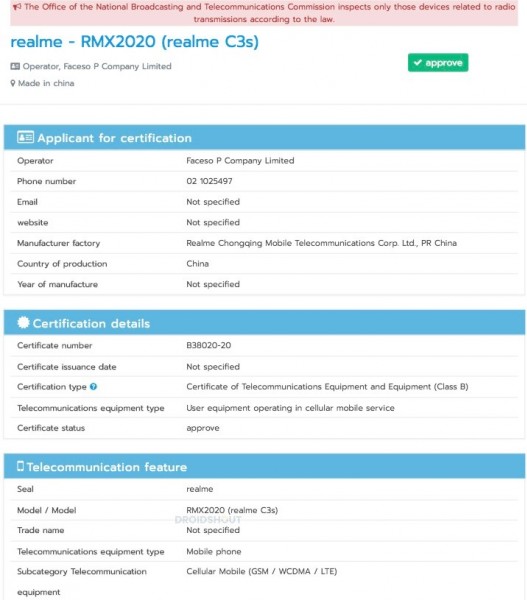 The Realme C3 got certified by Thailand’s NBTC last week, hinting imminent launch. Now we learn there’s an ‘s’ variant as well, which too has bagged NBTC certification.

The C3s also spots version number RMX2020, but other than that we don’t have any details about these smartphones.

Realme unveiled the C2s earlier this week, which is just a rebranded vanilla C2, so we believe that will be the case with the C3 and C3s as well.

More information about the C3 series should surface in the coming weeks.

Realme India CEO Madhav Sheth today announced that the company now has 10.2 million C Series users globally. The lineup includes the C1, C1 (2019), C2, and C2s. And if Sheth’s tweet is anything to go by, we’ll see the company add new phones to the lineup tomorrow.

Sheth didn’t reveal anything about the upcoming C series smartphones, but thanks to NBTC and FCC we know the company has C3 and C3s in the pipeline, which may go official tomorrow.

With 10.2 million users globally & more than 7.5 Lakh users rating 5/5 on Flipkart, the #realmeCSeries has been highly successful in disrupting the entry level segment.

The C3 and C3s both sport model number RMX2020, and going by the documents on FCC’s site, it appears these phones will sport more than two rear cameras and feature a rear-mounted fingerprint reader.

We’ll keep you updated once Realme reveals all about the new C series smartphones tomorrow.

OnePlus 8 5G to be sold by Verizon