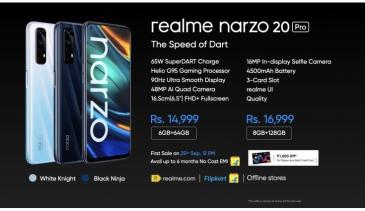 Finally, through an online event, Realme has launched the successor models of the Narzo 10 series – the Narzo 20 series.

Specifications of the Realme Narzo 20

On the inside, the Helio G85 alongside 4GB of RAM powers the Narzo 20 device. As for the storage, it offers the user with 64GB / 128GB of storage.

On the front side, the phone features an 8-megapixel selfie camera and a triple camera system on its backside.

The camera system includes a 48-megapixel main sensor, an ultra-wide 8-megapixel lens, and a macro lens with a 2-megapixel resolution.

The smartphone houses a massive 6,000mAh battery, and it carries support for 18W rapid charging technology.

Specifications of the Realme Narzo 20A

Like the Narzo 20, the Narzo 20A has the same display features except for the screen space. The Realme Narzo 20A offers the user with an 89.8% screen-to-body ratio.

Under the hood, the Snapdragon 665 chipset drives the smartphone. The processor is coupled with 3GB / 4GB of RAM and 32GB / 64GB of internal storage.

The Narzo 20A also features the same 8-megapixel selfie camera and triple rear camera setup as the Narzo 20, but the resolution of the cameras differs.

Unlike the Narzo 20, this device arrives with a lesser 5,000mAh battery. It carries support for only 10W charging.

Specifications of the Realme Narzo 20 Pro

The display delivers a 90.5% screen space.

The Helio G95 chipset serves as the engine room of the Realme Narzo 20 Pro. It debuts with up to 8GB of LPDDR4x RAM and up to 128GB of UFS 2.1 storage.

As for the optics, the Narzo 20 Pro packs a quad-camera system, which consists of a 48-megapixel primary lens, an ultra-wide 8-megapixel shooter, and a pair of 2-megapixel snappers.

On the front side, it houses a 16-megapixel selfie camera in its on-screen punch hole.

The smartphone relies on a 4,500mAh battery, which supports 65W fast charging tech, for its backup.

The three smartphones arrive loaded with the all-new Realme UI based on the Android 10 OS.

The Narzo 20 and Narzo 20A will be available in victory blue and glory silver color editions. The Narzo 20 Pro will come in white knight and black ninja color choices.

Below are the respective prices of different variants of the Narzo 20 lineup;