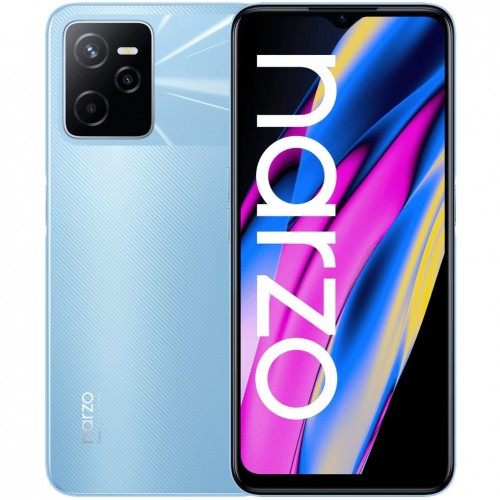 Realme, the China based Android based smartphones developed launched the Narzo 50A and Narzo 50i last September and followed up with the Narzo 50 last month. Today, the company added one more member to the Narzo 50 lineup, dubbed Realme Narzo 50A Prime.

The Realme Narzo 50A Prime is built around a 6.6″ FullHD+ LCD with a notch for the 8MP selfie camera. The back panel of the smartphone, having a kevlar-like texture, sports a rectangular island housing flash and a 50MP primary camera joined by the depth and macro units. Realme hasn’t revealed the resolutions of the last two but says the former has f/2.8 aperture and the latter has f/2.4 aperture.

The Narzo 50A Prime is powered by the Unisoc T612 SoC paired with 4GB RAM. The smartphone runs Android 11-based Realme UI R Edition out of the box and has two storage options – 64GB and 128GB. However, it also has a dedicated microSD card slot, allowing storage expansion up to 1TB.

The Narzo 50A Prime is 8.1mm thick and features a side-mounted fingerprint scanner for biometric authentication. It packs a 5,000 mAh battery charged through a USB-C port at up to 18W.

All this might sound familiar to you since the Realme Narzo 50A Prime is a version of the Realme C35 with a different chipset and slightly different rear panel design.