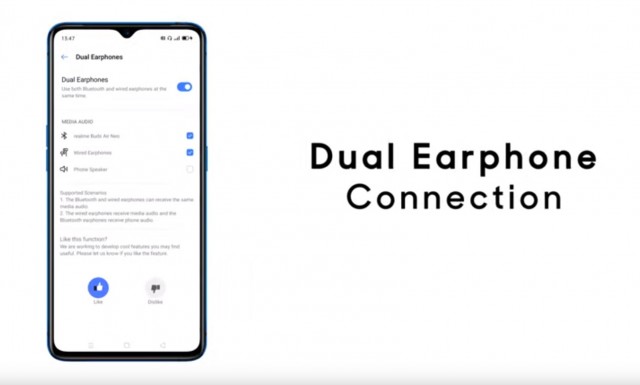 The Realme UI was officially unveiled today and amidst all the screenshots is a hint of an upcoming product – the Realme Buds Air Neo. Those can be seen in the Dual earphone connection screen in the settings.

The Realme Buds Air were announced in December and in our review we found them to provide amazing value for money.

The current buds don’t have active noise cancellation outside of calls so that’s one possible feature that Realme Buds Air Neo might bring.

As for the Dual Earphone feature, it lets you send different audio to wired and wireless headphones. For example, you can listen to music on your wired headphones and use a Bluetooth headset only for calls. This is just one of several features Realme is developing for its branch of Android.

Here’s the tease video, the Dual Earphone screenshot comes up at 0:06.

Realme is a Chinese smartphone manufacturer. The brand was officially established on May 4, 2018 (National Youth Day in China) by Sky Li, who was previously the Vice-President of Oppo Electronics. Realme also produces a wide variety of other products such as earphones, fitness bands and bags.

Android Auto gets over 100 million download mark on Google Play