Royole FlexPai which specializes in flexible display technology, has been functioning since 2012. The announcement of the FlexPai in 2018 revealed its existence to many. The company has launched the second generation of its foldable device – the Royole FlexPai 2.

Royole revealed its plans to host a launch event to unveil the FlexPai 2, and it is finally here. 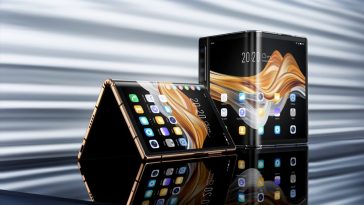 When open, the display measures 7.8-inches, which is pretty broad compared to any foldable device in the market presently. The screen has a 20:9 aspect ratio and offers a resolution of 1920 x 1440 pixels.

The Royole FlexPai 2 comes with the Qualcomm powered Snapdragon 865 chipset alongside 8GB / 12GB of RAM and 256GB / 512GB of internal storage.

Another major highlight of the FlexPai 2 is its upgraded camera system. It features a quad-camera setup, which consist a 64-megapixel primary lens alongside an ultra-wide 16-megapixel sensor, an 8-megapixel telephoto lens, and a 32-megapixel snapper, which doubles as the selfie camera.

The camera system is aligned vertically alongside an LED flash.

Other features of the device include a side-mounted fingerprint scanner, ambient light sensor, gyroscope, proximity sensor, and a compass.

The Royole FlexPai 2 boots to the waters 2.0 based on Android 10 OS. It arrives with a 4,450mAh battery which supports 18W fast charging technology.

Unfortunately, probably because of the robust storage options of the phone, it doesn’t feature a MicroSD card slot.

For now, the Royole FlexPai 2 is limited to China, and it will be available in Sunrise Gold, Midnight Black, and Cosmic Gray colour options.

Price of the Royole FlexPai 2