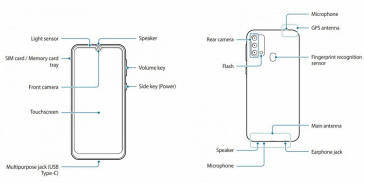 Multiple reports have been hinting the public about Samsung’s plan to launch a camera-focused smartphone.  The latest information mentions that the company is gearing up to launch the smartphone, which is named the Galaxy F-series, in India soon.

Claims suggest that the smartphone would arrive by the end of September or latest early October, and it would likely debut as Samsung Galaxy F41.

Though, as of now, there is no official confirmation about the existence of this smartphone, but its support page is active on Samsung India’s website.

However, ahead of the launch, a well-known tech tipster, Ishan Agarwal, has shared the schematics of the yet-to-launch Samsung Galaxy F41.

Meanwhile, the phone surfaced on Geekbench recently, and its Geekbench listing revealed some of its specifications.

The image of the schematics shared shows that the phone’s display would feature a waterdrop notch design. Its on-screen notch houses the selfie camera and a speaker.

The SIM tray is present at the phone’s left side while the power button and volume rockers grace the right spine of the handset.

Beneath the smartphone is a USB-C port, an external speaker, and a 3.5mm audio jack.

Looking at the phone’s back panel, the Galaxy F41 features a rectangular camera module housing three lenses and an LED flash.

A fingerprint sensor is present just a few inches away from the camera module.

According the Galaxy F41’s Geekbench listing, the phone will come with 6GB of RAM alongside an Exynos 9611 processor. It will ship out with Android 10 OS.

Furthermore, the information mentions that the Galaxy F41 would arrive in India in two variants.

The tipster also states that the phone would be available in blue, black, and green colour choices.

Jumia to set up a new pick up station in Ghana