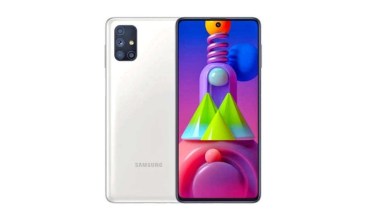 Samsung has officially unveiled the much-anticipated Galaxy M51 smartphone in India. After multiple reports and rumours, we now know what the phone looks like, and its features.

The all-new Samsung Galaxy M51 arrives with a Super AMOLED Plus 6.7-inch Infinity-O display. The screen promises to deliver a Full HD+ resolution of 1080 x 2340 pixels and a 20:9 aspect ratio.

Not only that, but the display also has a maximum brightness of 420 nits and is protected by Gorilla Glass 3.

The phone’s frame and rear panel are built from polycarbonate, and it weighs 213 grams.

On the inside, the Snapdragon 730G chipset powers the Galaxy M51. The processor is assisted by 6GB / 8GB of RAM. The smartphone features 128GB of internal storage and also has a MicroSD card slot for storage expansion.

On the rear panel, it sports the same quad-camera setup present on the backside of the Galaxy M31s. The setup includes a Sony IMX686 64-megapixel primary camera, a 12-megapixel ultrawide snapper, a 5-megapixel macro shooter, and a 5-megapixel depth assist lens.

On the front side, the Galaxy M51 houses a 32-megapixel selfie shooter in the dedicated on-screen punch hole.

The company equipped this device with an enormous 7,000mAh battery. It also supports 25W fast charging and reverse charging technology. As for the security, it features a side-mounted fingerprint scanner.

The Galaxy M51 will go on its first sale in India on September 18. Interested individuals have the option to choose in Electric Blue and Celestial Black colour options.

Motorola G9 Plus specification and Pricing Details Leaked Ahead of Launch