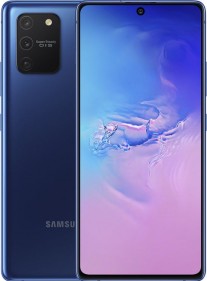 In other Samsung-related stories the rumor that Samsung will call its next flagship the Galaxy S20 instead of S11 seems to have been solidified. So guess we’d better get used to it.

Samsung also made headlines by announcing that it was the biggest 5G smartphone vendor in 2019 with 6.7 million 5G-capable phones shipped. The company also mentioned that it will be bringing its first 5G tablet in the first quarter of 2020.

OnePlus issued the first teaser for its ConceptOne smartphone, coming at CES 2020, and it showed an uninterrupted rear that hides a triple camera behind a dimmable glass. That’s basically a one pixel LCD, similar to a high-tech glass roof that can dim to reduce the amount of light coming through – neat.

An Apple-filed patent was revealed this week. It suggests that Apple is working on an iPhone without a front-facing camera, notch or FaceID. It’s unclear what Apple will make of this concept of an iPhone with a square screen, but it did make for a popular story.

Speaking of Xiaomi, it delayed its concept Mi Mix Alpha indefinitely. No reason was quoted and no specific release date was given so it might be a while before we get to see the wrap-around screen in person.

This week the specs and images of the realme 5i surfaced. The device will become official on January 6. A day later, on January 7, the Redmi K30 5G will also be unveiled.

Finally Huawei revealed that it has so far shipped 12 million Mate 30 series devices, despite the lack of Google Services. The maker has set its target at 20 million.

Realme 5i to arrive in India on January 2020