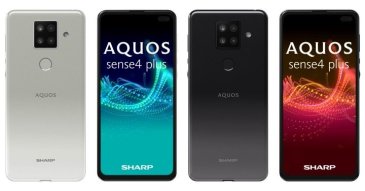 Also, the display on the smartphone has support for a 90Hz refresh rate and a touch sampling rate of 120Hz.

Under the hood, the company equips the Sense 4 Plus with a Snapdragon 720G chipset to oversee the operations of the phone. It arrives with 8GB of RAM and 128GB of internal storage space.

For storage expansion, the AQUOS Sense 4 Plus features a dedicated MicroSD card slot and it comes pre-loaded with the Android 10 OS.

Meanwhile, the handset features a dual-camera selfie setup, which comprises of an 8-megapixel primary sensor and a 2-megapixel depth assist camera.

On the backside, the Sense 4 Plus packs a quad-camera system that includes a 48-megapixel primary snapper, a super-wide 5-megapixel lens, and a pair of 2-megapixel snappers – one is a macro camera and the other is a depth lens.

As for backup, the Sharp AQUOS Sense 4 Plus pack a 4,100mAh battery, and the phone has fast charging capabilities.

Other features of the Sense 4 Plus include an IP56/68 rated chassis that makes the phone water-resistant and dustproof. It also has stereo speakers, a rear-fitted fingerprint scanner, and a 3.5mm headphone jack.