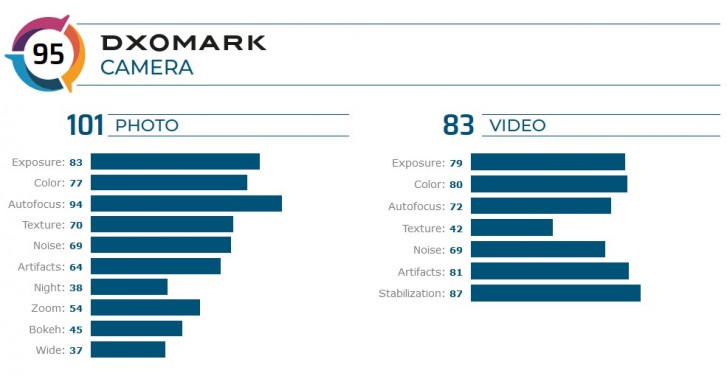 The latest smartphone tested by DxOMark is the Sony Xperia 5. Announced at IFA in September, the Xperia 5 is a midrange device with triple cameras, all with 12MP sensors. The Sony Xperia 5 was released a few months after the flagship-grade Xperia 1. Despite the former’s mid-range position and hardware, it uses an identical triple-camera setup as the Xperia 1.

Though there were improvements over the Xperia 1’s cameras, DxOMark wasn’t impressed with the Xperia 5. It received an overall score of 95 (the Xperia 1 got 91) with a 101 for photography and 83 for video. Slight improvements in photography are cited in exposure, textures, artifacts, night, and wide-angle shots with slight declines in color, autofocus, and zoom. DxOMark calls these differences marginal, deeming both devices comparable in image quality.

Video performance was in the same boat – marginal differences but comparable results. Now lets look at the weaknesses of the overall camera performance.

The first drawback cited was with dynamic range – the Xperia 5’s is limited, with highlights easily clipping in high-contrast scenes. Color rendition could also be improved with a more neutral white balance. Though low-light performance is not bad, it tends to generate a lot of noise in dimmer edges of the shot. Though autofocus wasn’t the slowest they’d seen, it was consistent and accurate on the Xperia 5.

Zoomed shots are what affected the overall score, with unstable exposure and focus. Color fringing was also noticeable along with noisy edges and unrealistic details and textures.

Video performance saw the same limited dynamic range issue, with highlights constantly clipping in bright outdoor footage. There are also some inconsistencies with white balance and unstable autofocus. The good news is exposure remains accurate and noise is well-controlled with effective stabilization.

The midrange smartphone was ranked alongside the Samsung Galaxy Note8 and the Apple iPhone 8 Plus, which is great for a midranger, but not great for the high-end Xperia 1. We really wish Sony would get the anchor out of its pants when other smartphones with Sony-made components are performing leagues better than its self-branded smartphones.

Oppo to launch a new smartphone soon, as it appears on TENAA