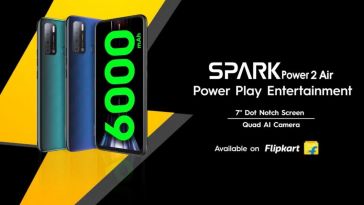 Tecno  has been at the top of its game since the beginning of the year and it’s not relenting. Since 2020 started, the brand has launched several devices, and now, Tecno has unveiled a new mid-range device called the Tecno Spark Power 2 Air.

The Tecno Spark Power 2 top features include a 7-inch screen, 13-megapixel quad-camera setup, Helio A22 chipset, and a 6,000mAh battery.

The device arrived India as a lower model of the earlier released Tecno Spark Power 2, which debuted in June.

Without further ado, here are the features and specifications of the new Tecno Spark Power 2 Air;

Also, the display on the smartphone delivers a maximum brightness of 480nits.

Under the hood, the Helio A22 chipset powers the mid-ranger. The processor is coupled with 3GB of RAM and 32GB of internal storage space.

The Tecno Spark Power 2 Air would arrive with HiOS 6.1 based on Android 10 OS.

On the front side, the handset has an 8-megapixel selfie sensor in its on-screen notch. It features a rectangular module which houses a quad-camera system on its back panel.

The camera system includes a 13-megapixel primary shooter, a pair of 2-megapixel cameras, and an AI lens. An LED flash is also present in the camera module.

The smartphone is equipped with a massive 6,000mAh battery, which promises longer usage time on a full charge.

Other features of the smartphone include a dedicated MicroSD card slot for storage expansion and a rear-fitted fingerprint scanner.

Interested customers can pick up the smartphone in Ice Jadeite and Cosmic Shine colour options.