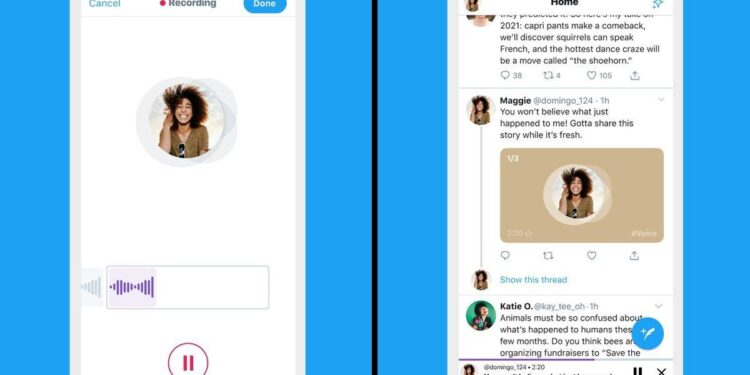 Twitter has debuted a new way for users to post their thoughts and ideas to the platform beyond the traditional 140 characters.

Everyone on the platform will soon be able to send voice tweets, the company announced Wednesday . Users will have to option to share audio recordings of up to 140 seconds directly to their feed to accompany the text, photos, videos, and GIFs they already can share with their followers.

The new feature is designed to “add a more human touch” to using Twitter, the company said in a blog post.

“There’s a lot that can be left unsaid or uninterpreted using text, so we hope voice Tweeting will create a more human experience for listeners and storytellers alike,” Twitter staffers wrote in the blog post. “Whether it’s #storytime about your encounter with wild geese in your neighborhood, a journalist sharing breaking news, or a first-hand account from a protest,we hope voice Tweeting gives you the ability to share your perspectives quickly and easily with your voice.”

However, some users have already brought up concerns about how the voice text feature could be misused. Vice’s Jason Koebler raised questions about how Twitter will moderate audio recordings, given that the platform is criticized as is for its inability to adequately monitor text-only posts. Women, people of color, and members of the LGBTQ community have detailed experiences over the years of putting up with abusive language, targeted harassment campaigns, and death threats.

It’s also worth noting that it doesn’t appear that voice tweets yet include an accessibility feature to allow for deaf and hard-of-hearing users to read what audio posts say through closed captioning. For tweets containing images and videos, Twitter lets users compose descriptions of visual content to make their posts accessible to those who are blind or have low vision.

The ability to create voice tweets is only available to a “limited group” of iOS users to start, but Twitter says the feature should roll out to everyone using the Twitter for iOS app “in the coming weeks.”