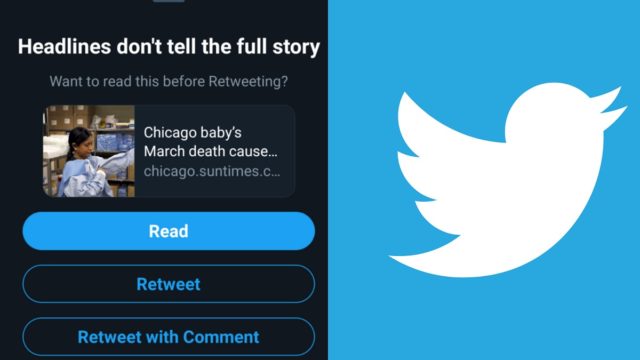 Twitter will soon start the testing of a new feature that will ask the users to think before tweeting unread articles. If a user is going to tweet an unread article, he will be shown a message asking him to read the article before retweeting it.

As reported by BuzzFeed, in the initial stages of testing, the feature will be available for Android users who use the app in the English language. The testing can go on for weeks to collect appropriate data and figure out future plans regarding the feature.

The pop-up for reading an article before retweeting it will appear when Twitter will analyze that people are spending less time on reading the content of the article.

Sharing an article can spark conversation, so you may want to read it before you Tweet it.

To help promote informed discussion, we’re testing a new prompt on Android –– when you Retweet an article that you haven’t opened on Twitter, we may ask if you’d like to open it first.

In an official tweet, Twitter Support said that sharing an article or retweeting it can initiate a conversation. In order to have informed discussions and avoid banters, Twitter is testing a feature that may ask the user to read the article before sharing it.

Kayvon Baykpour, Twitter product lead, said that this feature changes the way people look at the article before sharing.

This feature intends to make the platform a place for sensible discussions and also curb fake news.

In the last few months, Twitter has added a lot of new features for user convenience and filtration of the platform. One such feature gave an option to users deciding who can reply to their posts on Twitter.

Twitter also added a disclaimer to US President Donald Trump’s tweet that was said to glorify violence. The social media network also pulled down a tribute video shared by Donald Trump for George Floyd.

The microblogging site has also rolled out a new feature named Fleets, that allows the user to create posts that will disappear after 24 hours. This feature will provide expressive liberty to a lot of users on the platform.