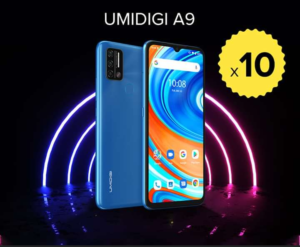 The Umidigi A9 Pro is an entry-level smartphone and it comes with a nice body wrapped with plastic and glass. It has a non-Removable Li-Po 4150 mAh battery. The back panel has a fingerprint sensor and a quad-camera layout. Umidigi A9 Pro was officially announced in china, joining others brand of the company series phone lineup.

The phone power off button is on the right side and volume buttons and on the left side is the dedicated shortcut key where also a provision for SIM Card slot is made for users.

The smartphone measures a 6.3-inch FHD+ display with 2340×1080 pixels resolution and 2.5D glass a water-drop notch. It reaches an 83.6% screen-to-body ratio and there is a corning gorilla glass 4 shielding the glass.

As for the camera, the Umidigi A9 Pro has a rectangle camera layout that has four sensors. The main snapper is about 48MP f/1.79 Sony sensor. Although, this is found on the 6/128GB variant. The 4/64GB model packs a 32MP Sony sensor. Other less are the same on both model and they include 16MP 120° FOV ultra-wide, two 5MP depth, and macro sensors. The front camera is about 32 MP on both variants.

The Umidigi A9 Pro has a Mediatek Helio P60 SoC along with an octa-core processor clocking at a speed of 2.2 GHz. The chipset is based on the 12nm process and it has Mali-G72 MP3 GPU.

The phone powering device is an Android 10 OS. The android phone is comes in two storage units. The standard model has about 4GB RAM and 64GB inbuilt memory with an expandable up to 256GB via MicroSD card slot, while the bigger model comes with 128GB and 6GB RAM. The good news is that they both support a micro SDcard slot for expansion if the users wishes to use MiscroSD card.

The phone has a 4,150mAh battery with 10W charging via USB-C. They said the battery promised to last up to a whole day of talk time. The phone is a dual SIM and a 4G LTE network.

Other features on the handset include an infrared sensor that measures the body temperature of people without touching them. There is also Wi-Fi, Bluetooth 4.2, GPS, and GLONASS.