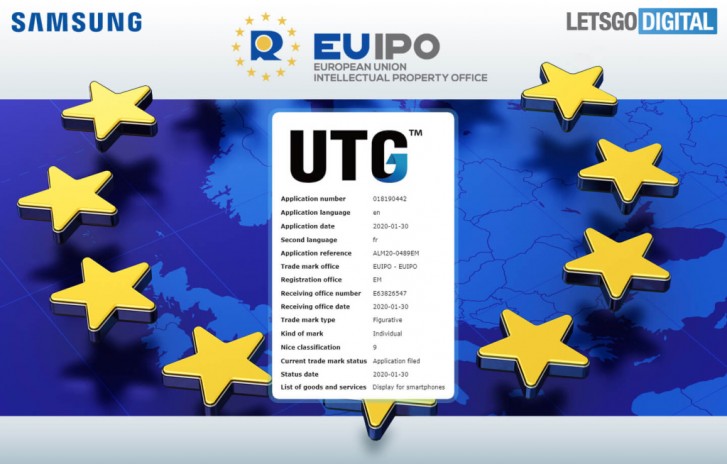 Samsung, the world’s largest manufacturer of mobile phones and smartphones.The company’s Foldable smartphones are certainly gaining a lot of attention as the new form factor challenges smartphone design as we know it. While we saw foldable smartphones and displays over the last year or so, they were all made with fragile plastic lenses atop the display panels. These are very easy to scratch and can easily cause damage to an otherwise expensive device.

Rumors suggested that Samsung’s upcoming Z Flip smartphone will use a new ultra-thin type of glass.

The UTG trademark logo may stand for “Ultra Thin Glass( is a high-end glass, having thickness less than a single human hair. It provides advantages over other substrate materials such as plastics, metals, and silicon)” and could be Samsung’s branding to market the foldable display glass against its competitors. The trademark would be used for Samsung’s foldable devices, and the design in the “G” reflects that.

Glass is more durable and scratch resistant than plastic. However, in such a thin sheet of glass(which is about 30 microns thin), about half the thickness of human hair – durability and scratch resistance remains to be seen in everyday use, according to report.

Corning (manufacturer of Gorilla Glass) told us a couple of months ago that it was working with undisclosed partners on developing foldable glass for this exact application, but the 12 to 18 month timeline they gave was not in line with the release of the Z Flip. So at this time, we’re not sure which company is making this kind of glass.

We’ve already spotted some rumors about Samsung’s next Galaxy Fold device, which suggest it may offer S Pen support. Should this be the case, a device supporting an S Pen would have no choice but to be made of glass – or perhaps UTG.

Samsung Galaxy Fold is an Android-based foldable smartphone developed by Samsung Electronics. Unveiled on February 20, 2019, it was released on September 6, 2019 in South Korea. The device is capable of being folded open to expose a 7.3-inch tablet-sized flexible display, while its front contains a smaller “cover” display, intended for accessing the device without opening it.

Samsung Galaxy Z Flip to have a 3,300 mAh battery

The phone, previously thought to be called Galaxy Bloom or Galaxy Fold 2, will reportedly come with a 3,300 mAh battery. That’s definitely unimpressive, but it is bigger than what Motorola could fit into its reimagined foldable Razr with its disappointing 2,510 mAh cell.